Morocco World News
Home Society Expatriates They Came With Cliches, They Leave With a Different Picture: Experience of...

Rabat – They thought that Morocco was just a barren desert, a land of dates and palms and camels. They came and they found iPhones, fast food, luxury cars–in short, they found Morocco much more familiar than foreign. These are the stories of foreigners in  Morocco, who come expecting 1001 nights, but leave knowing contemporary Morocco in all its glories and shortfalls.

Seelie, 20 years old and from Dallas, sits on the threshold of a modest house built in a narrow alley in the center of the old Medina of Rabat. Her green eyes scan  the children whose laughter invades air as they dance to Shakira’s “Waka Waka.” She tells me, in barely comprehensible Darija, “when I came to Morocco, I didn’t even know Moroccans had radio or television!”

Seelie will spend three months in Rabat, where she will live with a Moroccan family of four. Her modesty and lightheartedness have endeared her to her neighbors, who have affectionally nickname her Salma.

Every year foreigners like Seelie from all over the world come to Morocco, seeking to study either Arabic or French. They sometimes live with Moroccan families; sometimes they live amongst themselves. They come as tourists or students, and stay as expatriates. They come under the aegis of academic programs or as sole intellectual adventurers.

The time they spend with Moroccans in the heart of the popular neighborhoods and narrow alleys may be brief, but it changes world views and alters stereotypes. For instance, John, 20 years old and from Washington, tells me in creditable fusha that “the first time I came to Morocco, I thought it was all a desert.” Then he adds, in fluent English, while walking faster in his Rbati slippers towards  the train station “I was shocked and at the same happy  when I found out that Morocco does not differ  a lot from my country, there are  roads, infrastructure and technology .. I only saw camels and desert when I visited the south.”

Some of the foreigners are shocked as they walk the streets of this country and live among its people. They discover that it is a smaller version of their countries regarding modern technology, fashion and fast food, contrary to what they expected. Some of them find their soul mates in one of the alleys of the popular neighborhoods, a continent away from home. This is Kevin’s story, a Canadian who visited Morocco last year. His host mother, Chymae, recounts the story for me: “A Canadian named Kevin visited us last year. It was his first time in Morocco and when he went back to Canada he married to girl selling milwi in our neighborhood.” She adds? “she was a beautiful girl, he liked her, he asked her to marry him in clumsy Moroccan Arabic, and she said yes!” 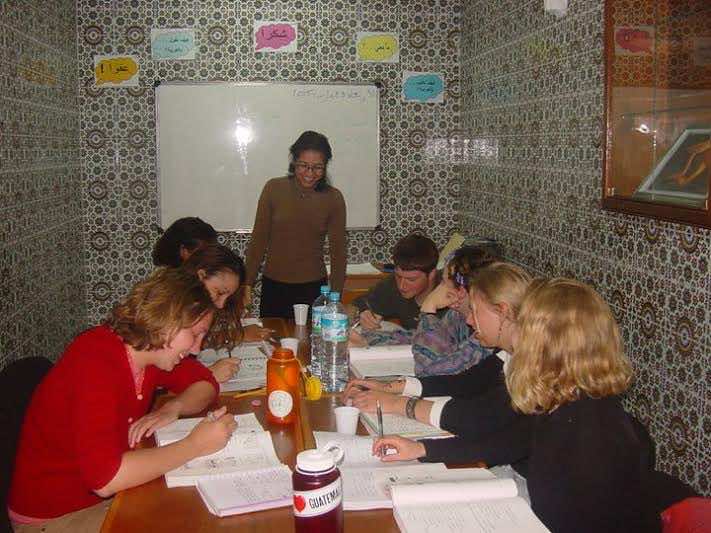 It’s  1 O’clock, it’s time for lunch chez Lamya, a 45 year old housewife and mother of 3 children. Lamya hosts many foreigners in her charming home in the medina overlooking Sidi Fateh. Her guests confirm her affability, hospitality, and ineffable sense of humor. They often call her “mother Lamya” with affection.

She explained to me, as she prepared a tagine for her German guests “I treat them like my own children, and no one annoys them, because I tell all the neighbors that they are my guests.”

The Germans in Lamya’s home today work with The Center for Cultural Communication,  located in Bab Laalou, where Lamyae regularly applies in odder to host foreigners in her rented house. This is her primary source of income, the MAD 100 or MAD 200 that she receives daily from her guests as a recompense for cooking, cleaning and caring for them.

Most of Lamya’s ‘children’ spend their time on the terrace of her house, contemplating Morocco as it lies before them. Lamya’s home is furnished in the traditional Moroccan style which foreigners seem to love: she put brass cressets on the edges of her home to mark the entrance, unfolded carpets with riots of colors to attract beholders and define the Moroccan style to visitors who seem yearning for everything traditional, exquisite, and different from their normal decor.

Her house guests offer penetrating insights about Morocco. Mark, 24 years old, sits on the ground in the left corner of the roof terrace, staring at the sky pensively. He says, with sadness, “Morocco is full of contradictions. I see the latest cars driving down the streets, and I see the different manifestations of luxury in upscale neighborhoods. At the same time, I recently discovered that a family of more than 7 can be jammed in one tiny room in the old Medina or in the Taqadoum neighborhood, and that some families don’t have the simplest requirements for a decent living, women even deliver their babies at home and no one bats an eye.”

Once foreigners set foot in Morocco, their journey of noticing contradictions starts. They feel surprised to see certain “odd” aspects in our country that differ from life in their home countries. But they soon get used to doing them, abiding by Moroccan cultural mores.

For example, Kelly, a French 20 years old, gushes about bargaining: “bargaining the price in Morocco is wonderful,” she says with a happy smile. “My Moroccan host-mother taught me how to bargain. Once I saved 5 dirhams!” 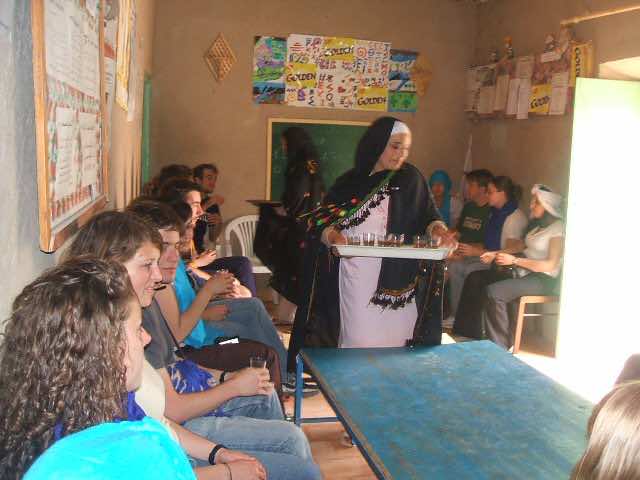 We want to speak Arabic

“I want to  learn Arabic. Here I am, challenging myself every year to learn a new language,” says Tim Fam, an American from San Diego. She insists on communicating only in Arabic, and her Arabic is consequently better than that of most foreigners.  She uses every opportunity to practice speaking quickly. She jokingly says: “It is hard for me to understand all  of the words because you guys talk quickly!” Nonetheless, Tim Fam makes sure not to speak English unless it  is impossible for her to communicate in Arabic.

As for Richard, a young American in his thirties, it is his will in not being misled by what  the U.S. media publishes about Muslims. Therefore, he decided to pursue his Arabic studies in Morocco after spending two years at the University of Karaouine, where he learned the alphabet.

He says in a determined tone, “our nation is moronic, I don’t want to be like that. When an American hears the word medrasa he automatically thinks that it is related to a place where Al Qaida members and terrorists gather to train. But in fact it is simply the word “school” in English.” He adds “most people have a negative prejudice about Muslims and this prejudice is caused by ignorance.”

Bob, a man in his twenties from Cambridge, sits on the left side of the Souk, in front of grocery store holding a book designed to teach Arabic for beginners. “I always make sure to talk in Arabic with the sellers to learn new words. Despite the fact my accent makes them laugh, they always teach me words that are used by today’s youth, so I can be up-to-date. People in Morocco are nice.” Bob is proud of his relationship with Morocco and Moroccans. Even in England, he makes sure he contacts the families that previously hosted him, and speaks in Moroccan dialect with them as often as possible.

This article was first published in Morocco World News Arabic and translated by Anas Zedgui. Edited by Ilona Alexandra.