Casablanca- Tunisian President, Moncef Marzouki, recently a guest on Tunisian television show “Liman Yajroo Fakat” (“Only for those who dare”), dispelled an earlier unsubstantiated rumor targeting Moroccan-Tunisian relations, that King Mohammed VI had decided to cut short his visit to Tunisia and return to Morocco because of a disagreement between the heads of State over the Western Sahara conflict. 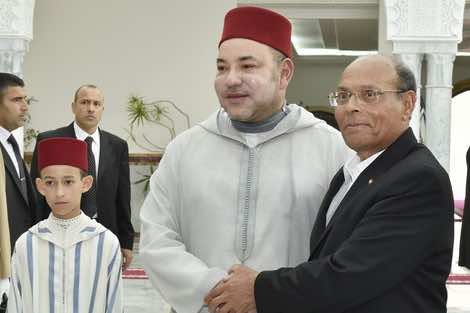 By
youssef sourgo
-
Youssef Sourgo is currently a Master’s student in Linguistic and Literary studies at Ain Chok Faculty of Letters and Humanities.
Jun 12, 2014
Spread the love

Casablanca- Tunisian President, Moncef Marzouki, recently a guest on Tunisian television show “Liman Yajroo Fakat” (“Only for those who dare”), dispelled an earlier unsubstantiated rumor targeting Moroccan-Tunisian relations, that King Mohammed VI had decided to cut short his visit to Tunisia and return to Morocco because of a disagreement between the heads of State over the Western Sahara conflict.

The head of the Tunisian state confirmed on the television show that the rumor regarding the Moroccan monarch’s supposed decision to shorten his recent visit to Tunisia due to a disagreement with the Tunisian President was false.

“There are very special human relations binding Morocco and Tunisia,” stated the Tunisian President in his response to a question asked by Samir El Wafi, the TV show presenter.

Asked about the rumor, President Marzouki confirmed that it was false and fabricated. “King Mohammed VI and I discussed all topics except the question of the Western Sahara.”

“These fabricated lies seek to shake and disrupt the exceptional brotherly relations binding both nations,” added the president. The parties disseminating this false information “also target the image and reputation of Tunisia,” he said.

Marzouki directly addressed the parties responsible for disseminating the negative rumors, saying, “If your nation is of no value to you, then at least value your own image and reputation.”

The Tunisian president also expressed his gratitude toward the Moroccan sovereign for his now-popular informal walk down the streets of Tunis accompanied only by a few bodyguards. “I told the Moroccan sovereign that [through his example] he had given us the best gift by showing that Tunisia is a safe and welcoming country, and by supporting Tunisian tourism.”

“The absurd and unfounded information, reported by some ill-intentioned press, over an alleged divergence between HM King Mohammed VI, may God assist Him, and Tunisian President, His Excellence Moncef Marzouki, is expressly denied by the Kingdom of Morocco.,” a release of the Royal office said.

A communiqué issued by the Tunisian Presidency had also denied the rumor as a fabrication.