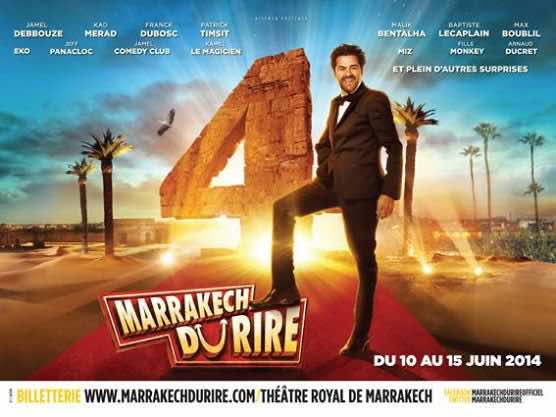 Marrakech – Last week, comedy festival organizer Jamel Debbouze and a number of  comedian friends met in Marrakesh to organize the fourth annual Marrakesh du Rire, from June 10 to 15, a festival created four years ago that has since grown to be a huge success.

Founded in 2011, the festival has grown year after year in both numbers of performing artists and numbers of attendees. From 2011 to 2014, the festival individual performances have increased from 3 to 15, the artist line-up has expanded from 20 to 60 artists, the number of tickets sold soared from 6,000 to 70,000, and the number of viewers on channels broadcasting the event (Moroccan, French, Belgium and Canadian TVs) went from 20 million to more than 70,000 million, according to Maghreb Arab Press (MAP)

Marrakech Du Rire is providing an opportunity for young comedians to get a “lucky break.”  “Ecko [a young Moroccan comedian] is the perfect proof of young comedians who got their big breaks thanks to this festival,” said Mr. Debbouzze.

The festival was held in different spots of the city such as Ksar El Badii, the Royal Theatre and some of the city’s squares. Comedians from Morocco and other countries participated in the festival, including Malik ben Talha, Baptiste Lecaplain, Max Boublil, Ecko, and many others.

Jamal Debbouze, highlighted at a press conference that the purpose of the festival is to present Morocco to the world and to select comedians from different backgrounds and help beginners improve so that they can perform on international stages.