Algiers - Algiers was vgripped by World Cup fever on Tuesday, with giant flags hanging from buildings and cars parading through the streets in the national colours as Algeria's first match in Brazil kicked off. 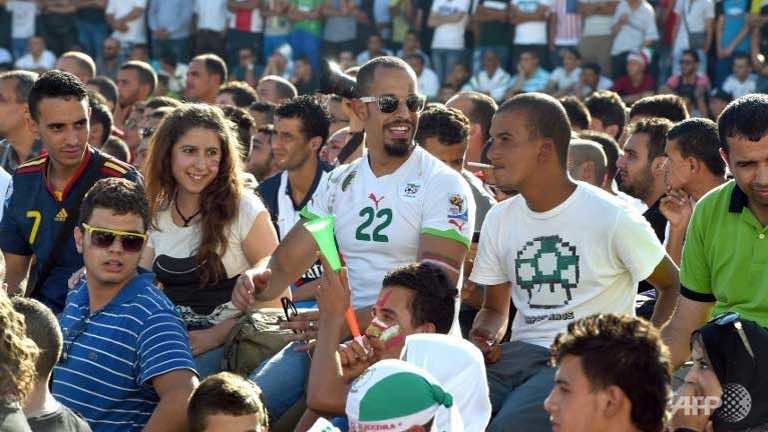 Algiers – Algiers was vgripped by World Cup fever on Tuesday, with giant flags hanging from buildings and cars parading through the streets in the national colours as Algeria’s first match in Brazil kicked off.

As the Desert Foxes launched their campaign against Belgium at 1600 GMT, at Brazil’s Mineirao stadium, there was a carnival-like atmosphere in the capital.

At the landmark central post office building, where a giant screen has been installed, hundreds gathered clad in patriotic hats and scarves, blowing whistles and South African vuvuzelas.

Earlier, the blare of car horns resounded in the city centre, while shops rigged up televisions to attract customers.

“I took the afternoon off so as not to be caught in the traffic and so I could watch the match,” said Kamel, in his 30s, convinced that Algeria’s Bosnia-born coach Vahid Halilhodzic can get them through to the knock out stages.

“Hope is allowed right up to the final whistle,” joked his girlfriend Leila, who mentioned cited modest aspirations: “an honourable participation.”

The crowds went wild when star midfielder Sofiane Feghouli scored from the spot in the 24th minute.

Many across the city took the afternoon off work to watch the match, whether in public, or in the calm of their homes.

While discussions about the likely score sometimes verged on the surreal, few doubted that Algeria would win.

Kheira, in his 70s, said she had prepared snacks and bought cakes for her five children, their spouses and her nine grandchildren to watch the match at her home.

“This is an opportunity to meet up and I hope we will be celebrating afterwards,” she said, ululating as passers-by clapped and youths chanted “One, two three, viva l’Algerie!”

Algeria is the only Arab country represented in the World Cup, and the match has generated intense excitement in neighbouring countries, notably Morocco, where most football lovers are rooting for Algeria despite the long-standing animosity between the two regimes.