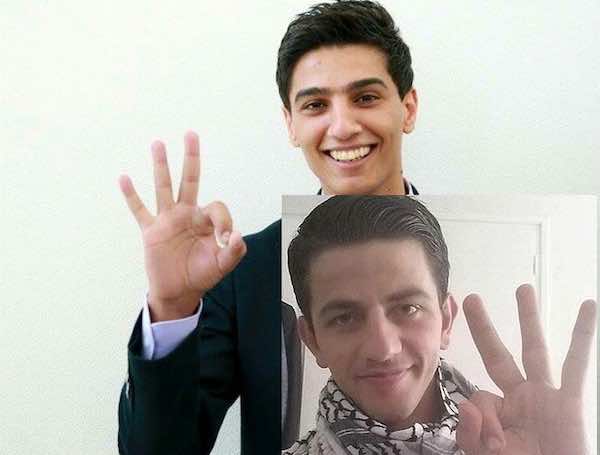 Paris – The Israeli online newspapers “Walla” and “Yediot Aharonot,” some of the most read in the country, published an article on June 17th reporting about Palestinians rejoicing at the latest kidnapping of three Jewish teenagers, but wrongfully used the picture of a Palestinian peace activist.

On June 12th, three Jewish teenagers were kidnapped while hitchhiking in the hills in the southern area of the city of Hebron in the West Bank, prompting strong condemnation and reactions from the Israeli public and national forces. The city and its immediate surroundings were put under curfew, while Israeli forces were deployed and have arrested so far more than 80 Palestinians.

Meanwhile, some fringe of the Israeli society accused the Palestinians of celebrating the brutal kidnapping, despite the official condemnation made by the Palestinian Authority. Indeed, a campaign called “3 Shalits” was started by individuals online, to support the kidnapping and call for more of them. The articles published on both media outlets reported about it by publishing several pictures either of the slogan and hashtag linked to it, of Palestinians raising three fingers, as a sign of condoning othe ruthless act.

Al Qadi, a 24 year old Palestinian who has been living in France for the past couple of years, has acquired some notoriety after climbing a mountain in France and putting the Palestinian flag on top of it to raise awareness against the ongoing occupation of the Palestinian territories.

However, it has appeared that the picture dates back to the previous year, during the massively broadcasted Arab Idol TV show, in which contestants were attributed a specific number to be used for public votes. Mohammad Assaf, a Palestinian contestant, quickly became the public’s favorite with Palestinians throwing massive online campaigns to get people to vote for him, including pictures of them smiling and raising three fingers to call on people to type “3” to vote for Assaf who eventually won the contest.

Mohammad Al Qadi, a long time peace activist, says that the picture being used in the Israeli newspapers is intact a picture he took a few years ago in order to support Assaf, and denies any link with the “3 Shalits” campaign, adding “I am against violence because it brings even more violence. I support peace and justice because I don’t want to lose more friends, I already lost my best friend when I was 14. I am extremely upset that my picture was used in the wrong place, having 120,000 followers on twitter makes me have more responsibility to help my people and show the truth so I hope the 3 Israelis will be freed as well as the 196 imprisoned Palestinian children.”