Jeddah - The 41st session of the foreign ministers council of the Organization of Islamic cooperation (OIC) opened this Wednesday in Jeddah with the participation of Moroccan minister of foreign affairs and cooperation, Salaheddine Mezouar. 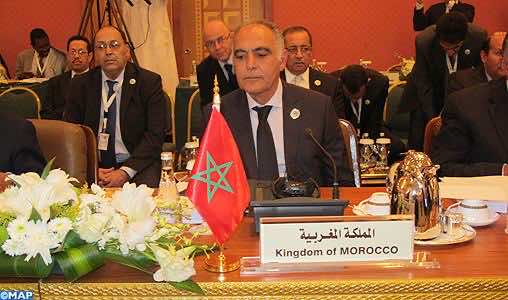 Jeddah – The 41st session of the foreign ministers council of the Organization of Islamic cooperation (OIC) opened this Wednesday in Jeddah with the participation of Moroccan minister of foreign affairs and cooperation, Salaheddine Mezouar.

The two-day session, themed “exploring Islamic cooperation fields” is held in the presence of president of the Palestinian authority, Mahmoud Abbas.

The heads of diplomacy of member-countries will be discussion the situation in the Muslim world and latest developments in the Middle East, including the Israeli-Palestinian conflict and the issue of Al Quds.

The situation of Iraq and Syria is also ranking high on the session’s agenda which also includes items related to the situation in Libya, the conditions of minorities in Myanmar and the Philippines in addition to terrorism and extremism.

On the sidelines, Jeddah will host meetings of the pan-Islamic organization’s contact groups on Jammu-Cashmere, Myanmar, Mali and Somalia, as well sessions between the Arab League member-states’ foreign ministers.