Rabat- President of the Moroccan Institute of International Relations (IMRI) Jawad Kerdoudi claims that sub-Saharan countries have become a priority to the Kingdom of Morocco for diversifying its economic partners, and for better integration in Africa. 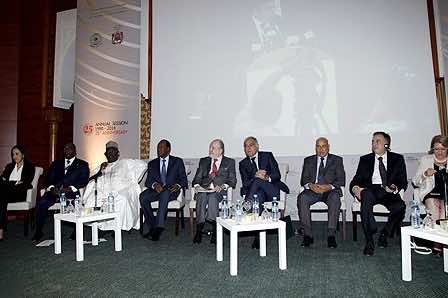 Rabat- President of the Moroccan Institute of International Relations (IMRI) Jawad Kerdoudi claims that sub-Saharan countries have become a priority to the Kingdom of Morocco for diversifying its economic partners, and for better integration in Africa.

Citing Moroccan cooperation with sub-Saharan countries as a model of south-south cooperation in the second day of Crans Montana Forum, Kerdoudi highlighted the major role of Morocco in economic development and integration in Africa.

“Thanks to its strong ties with sub-Saharan countries, Morocco is known worldwide as a model of south-south cooperation. Moroccan business circles are among the most active in Africa. They are key actors in economic development and the major investors, as Morocco is today’s meeting point between sub-Saharan countries and Europe,‘’ Kerdoudi told Morocco World News.

“During the past ten years, Morocco obviously registered an acceleration of economic and political corporation between the kingdom and the sub-Saharan Africa, because these countries have become a priority to Morocco in order to diversify its Economy,’ he added.

”Although Morocco is the second largest investor in Africa after South Africa, the Moroccan economy is still oriented mainly to Europe. Therefore, it is now a priority for the Moroccan economy to diversify its partners, and focus on sub-Saharan Africa first,” Kerdoudi said.’

On the other hand, , Mu’azu Babangida Aliyu, governor of Niger State in Nigeria, told Morocco World News that the bilateral cooperationbetween Nigeria and the Kingdom of Morocco is limited to the political aspects.

Regarding the challenges that prevent economic cooperation between the two countries, he said: “When you are dealing with too many African countries, you need to prioritize where you are doing the best that you can. Also, for several reasons, Morocco is not in the African Union. So, whenever it’s convenient for Morocco to join the African Union, it will encourage Nigeria to further its relationships with Morocco.’’