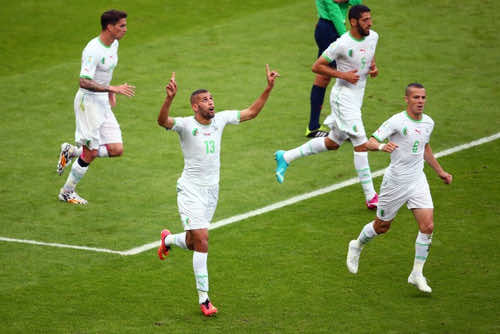 San Francisco- In the 1982 World Cup, Germany and Austria shamelessly conspired during their last game to prevent Algeria from advancing to the next round. This year, the Fennecs were not willing to go home after only three games when 80 million North Africans were counting on them to repeat Morocco’s 1986 World Cup performance, when Timoumi and company won their Group after holding both Poland and England to goalless draws and beating Portugal 3–1.

Algerians have been waiting to face Germany for 32 years to correct the injustice that took place in Gijon in 1982. On Monday, June 30, they will have that opportunity. They will try to create the biggest surprise of the World Cup thus far and beat Germany. It is a seemingly impossible task, but then again it is no different from that day in 1982, when a German player said before the game, “We will dedicate our seventh goal to our wives, and the eighth to our dogs”.

Another player said, “Even if we play with our dress suits, we will beat the Algerians”

In 1986, Morocco held out against Germany until the 87th minute, when Lothar Matthäus scored the only goal of the match, winning the game for Germany. Let the Algerians change the outcome this time and accomplish the impossible dream: to be the first Arab Nation to reach the quarterfinals.

Regardless of our political differences, Moroccans will be cheering for Algeria because in football, it is the people who have the last word, not the politicians or the authorities. They can keep the borders closed, but they will be able to close our hearts and our souls.