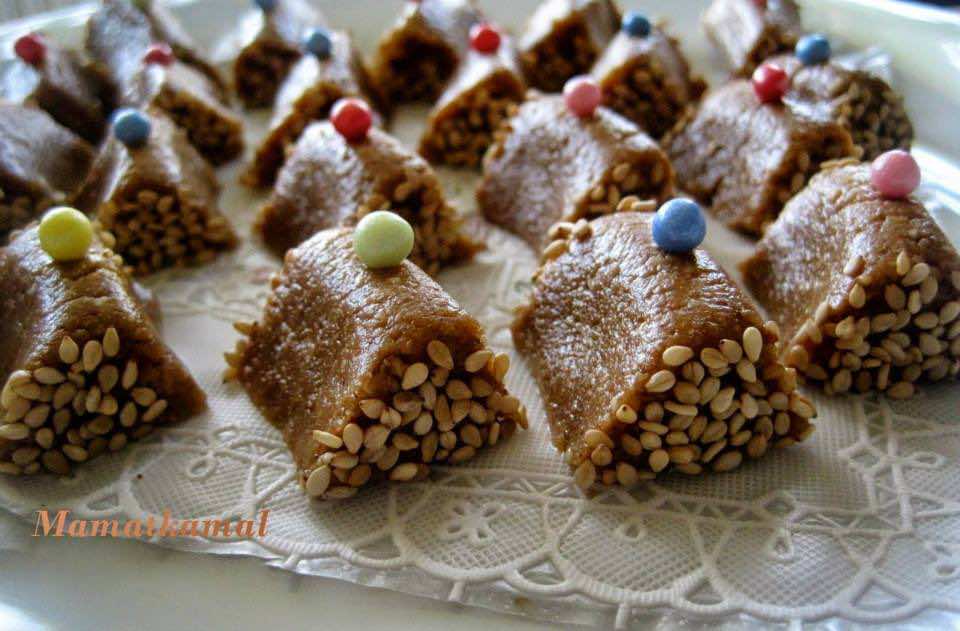 Agadir – This is Tquawt or Sellou or Slilo or Sfouf or Zmitta. It has so many different names but each name refers to the same nut-based paste, known as energy paste or brown mixture. This is a unique Moroccan specialty made of an amazing mixture of almonds, sesame seeds as well as other spices and flavorings. Sellou does not only leave a lasting visual impression but does wonders to your taste buds too!

Although Sellou might seem complicated to make, it is surprisingly an easy recipe if you have the right tools and ingredients. Most Sellou recipes contain two basic nuts (almonds and sesame seeds), which are blended along with regional and traditional spices into a thick rich paste. Though Sellou is one of several traditional dessert treats, served at weddings, newborn ceremonies and other special occasions, it is particularly consumed during Ramadan for Ftour or Iftar (the meal before the break of dawn and the evening meal that breaks the day-long fast respectively), as it is exceptionally nutritious and gives instant energy. Actually, this quality has made Sellou synonymous with Ramadan.

Traditionally, Sellou is considered a natural dietary remedy and is recommended for nursing mothers as it has been known to increase lactation. In fact, Moroccan nursing mothers consume this nutritious and fortifying paste for at least 30 days after childbirth.

Sellou is no exception to other Moroccan recipes as it widely varies from one region to another. Furthermore, each family has its own secret recipe that includes the best fresh nuts and spices to make the tastiest and most energy-inducing paste. Sellou recipes remain controversial when it comes to the discussion of the ingredients. Some recipes call for additional fresh nuts, apart from sesame seeds and almonds, and different spices or flavorings for health benefits. Others use pure olive oil or argan oil and honey instead of clarified butter and icing sugar, which is much healthier. Some use roasted flour, whereas others do not. Despite the traditional and official recipe, Moroccans and cooks everywhere use various ingredients, but the result is undisputed; a rich and tasty energy paste where flavors build and melt together creating an outstanding dessert!

Sellou is a sweet treat that typically tastes better with age. Traditionally, it is prepared one to two weeks before the start of Ramadan, and is supposed to last for the duration of the month. In some cases, there is enough to stretch out over a couple months (most freeze well, though it is not necessary to freeze Sellou). This explains the preferred use of clarified butter in the traditional recipes given its long-lasting freshness.

As you may know, there are several versions as well as adaptations of Sellou from all parts of Morocco that seem confusing. In general, there are four variations of Moroccan Sellou:

1-Sellou or Slilo or Sfouf: This version calls for roasted white or wheat flour as the main ingredient aside from the basic nuts and spices. The flour should be roasted in the oven or in a heavy, ungreased skillet or pan until golden, stirred every few minutes to prevent it from burning. Your kitchen will smell just like one of the many Moroccan bakeries just around the corner.

2-Tquawt: This is the flourless version of Selou. Basically the same ingredients in Sellou are used except for roasted flour. (My mother used to make this version, and it was so delicious it was to die for!)

In the South, Souss region, there is a sweet and a savory version: the sweet version is made by mixing roasted barley flour with argan oil, adding pure honey and a pinch of salt to the mixture resulting in a crumbly consistency. The savory version requires boiled water, a pinch of salt and argan oil. In some regions, where argan oil is not available or too expensive, pure olive oil is used instead. In Mekness and Taza, Sellou is called Zamita. The word Zamita in these regions refers to the Sellou variation known in Casabalanca, Fes, Rabat, etc… The Meknassi variation includes toasted peanuts along with other special regional ingredients.

4-Taquenta: This is the Sellou version of Oujda. It is easy to make and mainly made of flour browned with salt and oil. Honey is added for sweetening.

Traditionally, Sellou is presented by mounding the mixture into a pyramid on a plate, decorated with toasted almonds. Then Sellou is placed on individual plates and served to each person, just like cake (See picture below) 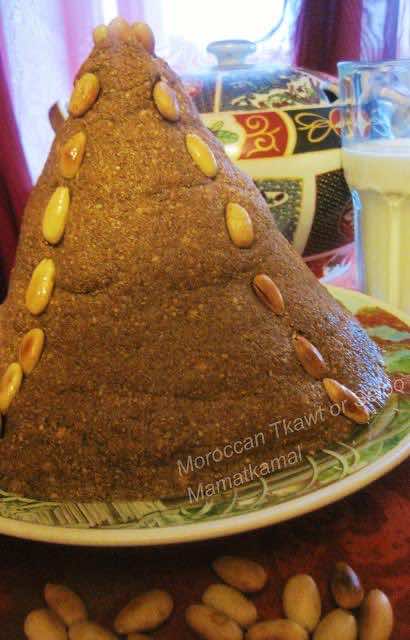