Rabat- The Embassy of the Netherlands in Morocco called upon Moroccans to root for the Dutch team in its upcoming game against Mexico in the second round of the 2014 World Cup in Brazil. 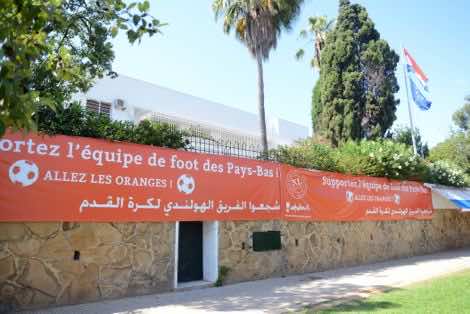 By
Aziz Allilou
-
Aziz Allilou is a student at the Higher Institute of Media and Communications (ISIC) and Morocco World News correspondent in Rabat.
Jun 28, 2014
Spread the love

Rabat- The Embassy of the Netherlands in Morocco called upon Moroccans to root for the Dutch team in its upcoming game against Mexico in the second round of the 2014 World Cup in Brazil.

The Netherlands has a large Moroccan diaspora. More than 400,000 Moroccans live in the Netherlands, a country that has provided a number of talented players to the Moroccan national team, such as Oussama Saidi, Mounir El Hamdoaui, Nordin Amrabet, Mbarek Boussoufa, Ali Boussabone, and others.

A number of Dutch-Moroccans chose to play for the Netherlands. Khalid Boulharouz, who played in the 2006 and 2010 World Cups with the Dutch, and Ibrahim Afellay, who participated in the 2010 World Cup, are among the most famous players of Moroccan origin who wore the Dutch jersey.