Marrakech - Richard Hamilton has worked for the BBC World Service as a broadcast journalist since 1998, including being a correspondent in Morocco, South Africa and Madagascar. He also reports for BBC TV, radio and online. While living in Morocco, he co-authored the Time Out Guide to Marrakech and has written throughout his career for magazines and newspapers such as Conde Nast Traveller and The Times. He has an MA in African Studies from SOAS. Richard’s first book, The Last Storytellers: Tales from the Heart of Morocco, was published in 2011. 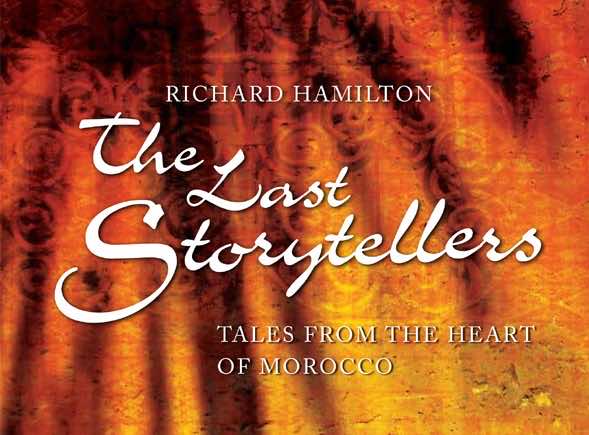 Marrakech – Richard Hamilton has worked for the BBC World Service as a broadcast journalist since 1998, including being a correspondent in Morocco, South Africa and Madagascar. He also reports for BBC TV, radio and online. While living in Morocco, he co-authored the Time Out Guide to Marrakech and has written throughout his career for magazines and newspapers such as Conde Nast Traveller and The Times. He has an MA in African Studies from SOAS. Richard’s first book, The Last Storytellers: Tales from the Heart of Morocco, was published in 2011.

MWN: How can the traditional oral story telling culture survive in Morocco?

Richard Hamilton: When I first researched my book, my initial thoughts about the fate of storytelling were very pessimistic, for a number of reasons. First of all, modern technology has provided Moroccans with more immediately accessible forms of entertainment and distraction. In the old days you would have had to walk to the Jemaa el Fna, muscle your way into the audience or halka and sit down for an hour or so to listen to a story, and probably felt obliged to pay the storyteller a few coins. You might have to come back the next day if you wanted to hear what happened in the story. But now without even having to leave your room or move your rear end from your armchair, at the simple click of a button you can download movies, tv programs, and interact on social media with people from all over the world who tell their stories in bite-sized form. You can also of course turn on your television or rent a pirate DVD.

In North Africa and the Middle East, the story telling tradition started to decline from around the 1950’s with the advent of radio and television. Now it is the internet’s turn to speed up this process. People’s concentration spans have become so fragmented that the chances of them wanting to listen to a long epic tale are very small. Secondly the spread of literacy, while a good thing, has had a huge impact on oral culture. Other parts of the world have seen the same phenomenon; as people are taught to read, they no longer need someone else to read to them. This happens on a microscopic scale within every family; when a child learns to read, he or she is not dependent on mummy or daddy reading to them anymore. This is a sad loss for the parent but perhaps it is inevitable. There are however grounds for greater optimism now. For example the storytelling project at the Café Clock in the Kasbah in Marrakech is starting to gather momentum. In many developed nations too, I sense there is a real appetite to revive oral culture, perhaps because we feel we are missing something. In France for example there are now several hundred storytelling festivals every year.

MWN: How can it best be preserved?

Richard Hamilton: Of course you can record stories in audio form, or you can collect them and transcribe them, as I have done, in the form of a book. While this is a good thing, it is no substitute for the living breathing experience of listening to a folk tale in the flesh. The Native American folklorist Joseph Bruchac put it very well: “the story lives with the storytellers breath.” The danger is that manuscripts, collections, exhibitions, museums of folklore and so on are not alive, they are just archival projects, like putting butterflies inside a glass cabinet. They are frozen in time. I think there is still room for both the recorded version and the live performance. For example, people listen to recorded music, but they also still like to go to concerts to feel the vibrancy and uniqueness of that experience.

MWN: How can young story tellers be initiated into the art of storytelling and can they find an audience?

Richard Hamilton: Again the Cafe Clock is a good example of how to involve the young generation. Here master storytellers are transferring their knowledge to young apprentices. It may be a fairly small venue with a limited audience but it is at least a start. I would like to see the Moroccan authorities doing a bit more. For example the Ministry of Education could include storytelling on its curriculum or even create an academy of storytelling. I also think that international organisations like UNESCO have to show a bit more gumption. They need to demonstrate that they are more than just talking shops and actually do something concrete. In the past, storytellers have visited schools to tell stories to young children. I understand that there was a lot of enthusiasm for this among the pupils, but I am not sure it was done on a big enough scale to make a real difference.

MWN: Would videos and YouTube be a good way to preserve story telling?

Richard Hamilton: I think the internet has huge potential to come to the rescue of the storytelling tradition. Although, as I say above, modern technology is killing off traditional culture, it could also paradoxically hold the key to its survival in the future. Some years ago Moroccan national radio recorded some of the great epic Islamic tales told by the storytellers, and still has the archive recordings in its vaults. In the same way I think it would be wonderful if young people across the globe could have access to these fantastic narratives via YouTube. But again, it is not quite the same as the real thing. In the end we can only hope and pray that storytelling will somehow survive.