Casablanca - Moroccan cleric Abdel Bari Zamzami recently approved a Fatwa (legal religious opinion), issued by an Algerian scholar, in which he said that Isha (the fifth prayer) and Tarawih (extra evening prayers performed during Ramadan) could be delayed until Algerian supporters watch Algeria’s World Cup match against Germany on Monday, according to Hesspress. 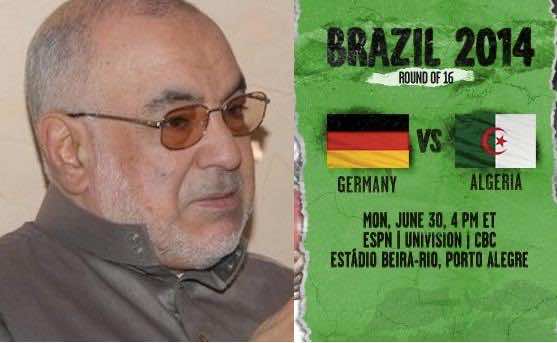 By
youssef sourgo
-
Youssef Sourgo is currently a Master’s student in Linguistic and Literary studies at Ain Chok Faculty of Letters and Humanities.
Jun 30, 2014
Spread the love

Casablanca – Moroccan cleric Abdel Bari Zamzami recently approved a Fatwa (legal religious opinion), issued by an Algerian scholar, in which he said that Isha (the fifth prayer) and Tarawih (extra evening prayers performed during Ramadan) could be delayed until Algerian supporters watch Algeria’s World Cup match against Germany on Monday, according to Hesspress.

According to the same source, Zamzami approved the Fatwa for two main reasons: first, because it is religiously permissible and recommendable to postpone Isha prayer until a later time, and second, because to attain complete Khouchou (concentration and devotion in prayer), the Muslim praying must be free-minded of all disquiets and anxieties.

The Fatwa was issued by the Scientific Council for Fatwas of the Algerian Ministry of Islamic Affairs and Endowments, headed by Kamal Al Bouzidi. The Fatwa states that it is permissible for Algerians to postpone the Isha prayers in order to support the national team in its match against Germany.

Al Bouzidi confirmed that the Fatwa was acceptable from a theoretical perspective, but that its implementation is in the hands of the Ministry and its administrative bodies, who have the final right to issue Fatwas and publicize them.

The controversial Fatwa made waves in the comment section of the online news portal Hesspress and on social media. The bulk of reactions were negative, describing the Fatwa as “ridiculous,” and calling Zamzami “a foolish cleric.”

After their triumph over Russia, the Algerian team is scheduled to play against Germany on Monday in Porto Alegre. The teams have not met in the World Cup since 1982, when Algeria, in its first-ever appearance at a World Cup, won 2-1.