Casablanca – Algerian fans celebrate too roughly in the eyes of the authorities in France. 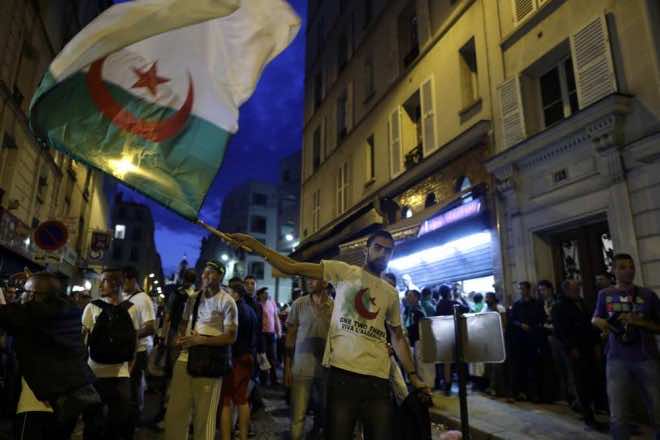 Casablanca – Algerian fans celebrate too roughly in the eyes of the authorities in France.

The World Cup has caused a big issue between the French police officers and Algerian soccer fans. Nice, the fifth largest city in France, known for its international population, calls for a ban on public displays of international flags on its streets.

Today, Christian Estrosi, the Mayor of Nice, announced through the press, that international flags, in order to celebrate one’s favorite soccer team are no longer permitted. This ban is supposed to last until the World Cup is over. “I decided to take this order to provide the legal means for law enforcement to intervene,” said the Mayor of Nice.

Last Thursday, after Algeria  qualified for the second round of the World Cup, several French cities went out of control during the celebrations, which led to the arrests of more than 70 people for rioting and looting.

This ban intends to, “maintain order and public tranquility and avoid overflows, as of those that have taken place on the night of June 26 to 27 in the area of Paris, near Lyon and Marseille.”

“The flashy use of foreign flags is prohibited in the city center of Nice from 6:00 p.m. to 4:00 am and until the end of the World Cup, which will be on the 13th of July,” said Mayor Estrosi.

He continued, “Since the beginning of the World Cup, we are unfortunately faced with intolerable behavior that affect the public serenity. We cannot accept these excesses! They are an example of the loss of authority of the state.”

According to the Daily Nation, Algerians make up France’s largest immigrant group with approximately two million people, whose majority hold dual citizenship. The recent behavior of some Algerian fans brings new fuel to the ongoing conflict with the French Authorities. However, it was also stated that only little groups of trouble-makers were to blame and that the bad behavior does not reflect upon the Algerian community as a whole.

Tonight’s match between Algeria and Germany, in the second round of the World Cup, is expected to bring another wave of enthusiastic Algerian fans to the streets for more celebrations. This match, and its accompanying enthusiasm, can explain why French authorities are getting prepared to deploy more police officers in hopes of preventing further looting or rioting on the streets.