Fez - Isis Center for Women and Development, an NGO based in Fez, held on 20-22 June an international workshop on the state of women’s rights after the Arab Spring in partnership with the Konrad Adenauer Stiftung – Rabat, Kvinfo (Denmark), INLAC Fez, and Aalborg University (Denmark). 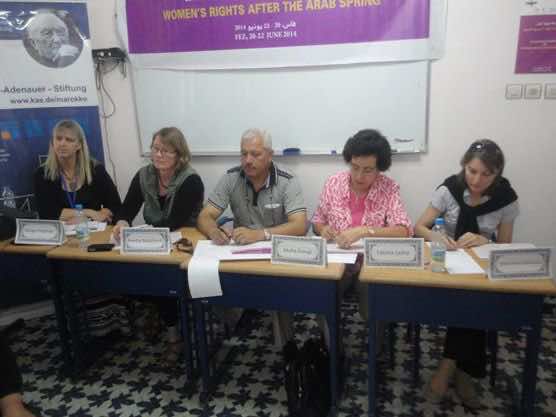 By
Moha Ennaji
-
Moha Ennaji is an author and international consultant.
Jul 4, 2014
Spread the love

Fez – Isis Center for Women and Development, an NGO based in Fez, held on 20-22 June an international workshop on the state of women’s rights after the Arab Spring in partnership with the Konrad Adenauer Stiftung – Rabat, Kvinfo (Denmark), INLAC Fez, and Aalborg University (Denmark).

Conscious of the fact that women’s rights are a genuine barometer of the democratic process, the state of women’s rights three years after the revolutions continues to worry civil society and the intellectual community in the region. It appears that these rights, which are the fruits of militancy where academics, activists and politicians (men and women) took part, are experiencing a sharp decline. This situation calls for a serious and calm debate. The workshop addressed the relevant challenges through the following themes:

1. The political participation of women

4. Violence against women and individual and public freedoms

5. The impact of social media

6. The issue of masculinity

Professors and experts from North Africa (2 from Tunisia, 4 from Algeria, 10 from Morocco), the Middle East (2 from Egypt, 1 from Lebanon), Europe (3 from Denmark, and 1 from The Netherlands) and the United States enriched lively debates on these and related issues. A number of young students and researchers of both sexes participated in this high-level event.

At the end of the workshop, the participants agreed on the following recommendations:

1. Reinforce women’s NGOs and civil society to enhance their rights and implement the family laws and the new Constitutions

4. Enact and implement laws to stop violence and harassment against women

6. Include other identities and perspectives and bring them together

7. Shift focus and center on common fields rather than conflictual division

8. Pay more attention to the classroom level and discourage violence on TV and internet

9. Encourage creation and innovation of women

10. Promote the culture of equality in textbooks

The workshop also discussed the social, psychological and religious factors and negative stereotypes preventing women from political and economic participation. However, despite all the social restrictions and cultural constraints, women in North Africa and the Middle East have been able to impact public institutions since the 1960s. The success of democracy in the region depends on the political mobilization of women and the ability of women’s organizations to unite across generations, classes, and ethnic groups.

Today, we see, more than ever before, calls for gender equality, social justice, and democracy in the region, which implies an urgent need for further reforms which must boost job creation, youth participation, and women’s empowerment in the public and private sectors. The situation requires the establisment of the rule of law, democratic institutions, law enforcement, and awareness raising among men and women.