Bethesda, Maryland- As political instability foments crisis after crisis in Syria, a different kind of resistance is emerging - a resistance against poverty and conflict.

By
Omar al Muqdad
-
Omar al-Muqdad is a Syrian journalist currently living in the United States.
Jul 4, 2014
Spread the love

Bethesda, Maryland- As political instability foments crisis after crisis in Syria, a different kind of resistance is emerging – a resistance against poverty and conflict.

The war in Syria has killed 200,000 Syrians and displaced a million more, according to Syrian opposition numbers and UN. What is worse,  the children of Syria are suffering the brunt of this war.

UNICEF announced that “5.5 million Syrian children have been affected by a brutal, three-year conflict. 2.8 million children are no longer in school and more than 1 million are living as refugees in neighboring countries.” 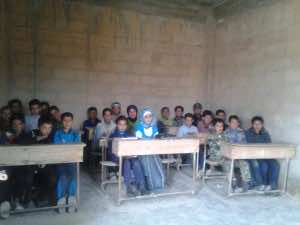 Months ago a shocking video stormed social media, showing a group of men teaching a child how to execute a man by handing him a sword and making him behead a victim. Pictures uploaded online show Al Qaeda schools in northern Syria, teaching ignorance and radicalism to future generations.

Yet in the midst of all the horror, a few voices work tirelessly to reverse the disruptive effects that war has on education for children. Highly educated activists, doctors, engineers and university students have joined to make a difference in Syrian schools.

Farah Al Naif, a Syrian activist who fled Syria and now lives in the United States, started a project in Syria in September 2013 with the Department of State. The Farah Project,  funded through the MEPI Foundation, was launched to reduce the influences of the radical groups in Syria and to provide an equal education system for Syrian children.  Since 2012, the children of Syria have been the most affected as their future and education is imperiled. “This project is an education program,” Al Naif explained, “where over 2600 children have already benefited in Dayr Alzour.”

“We tried to help the families, too, by getting their kids to the schools. We also created a kind of civil education system, where no flags, religious or political signs are used. We began by equipping two schools in Dayr Alzour, East Syria, and now we are aiming to cover different locations in the north,” added Al Naif.

Al Naif’s work has remained anonymous. She believes the Syrian opposition groups have not helped at all in getting help from the residents and the activists individually. It has evolved into a personal effort with the help of the MEPI fund, as the opposition continues to call for armaments, recreating the same problems and tired frameworks.

“This has not been a simple task, Al Naif expressed. “The  difficulties and risks faced, especially in unstable cities where radical Islamism and bombardment has become a part of daily life are enormous. Militant threat, school occupation, and lack of safety were constant fears, but through all these obstacles, we’ve made it through the year with success.”

Dr. Khaled from Northern Idleb, believes that the biggest concern is the children who have withdrawn from their schools because of the war. “Everyday I see tens of them in the streets of Aleppo and many of them start working to support their families, selling goods in the streets. If I asked one of them, ‘What do you want to be in the future’, he replys ‘ A warrior!’”

Priyanka Mataparthy, a children’s rights researcher at Human Rights Watch and author of the report which was published in June 2013 said, “Schools should be havens, but in a country that once valued schooling, many Syrian children aren’t even getting basic education and are losing out on their future.”

However, activists and NGO’s such as the Farah Project,  are trying to ameliorate this critical problem.  Al Naif added, “We still need more attention and support on this issue, because we have thousands of children, from 3 years of age, who haven’t received any kind of education.”

At the beginning of 2012, Al Qaeda infiltrated Syria and since then they’ve gained ground, depriving thousands of children from education. The UN reported, “Over 2,000 Syrian schools have been damaged or destroyed and hundreds more are being used as shelters.” In April 30, 2014, Syrian forces dropped a barrel of bombs on an elementary school near Aleppo; 25 children died, the LCC reported.

Orwa Abu Al-ward, an activist from Aleppo, said, “The barrier in the rebel-held area is under the mercy of the regime. If the regime attacks north Aleppo, the people flee to another place and studies halt. In more stable areas schools still operate, but in places like Bab Al Nayreb, Albab Road and Hanano, ‘No life, No education.’

“The religious schools that now are taking the place of secular schools are not the problem, especially with moderate groups. But it’s a scary fate when it comes to the radicals; ISIS for example. Currently there is a huge devastation in Aleppo and I dare say no serious education is in progress,” added Abu Al-ward.

Anas, an activist from Al Raqa believes that although these activists have done incredible work, unfortunately the attention is not enough. “This devastated war raging to cover most of the Syrian territory increasingly proceeds towards sectarianism, burning everything in its way and leaving only a dark future for the children of Syria,” Anas added.

Children in Syria regularly bear witness to violence and to the trauma of war. Even school is not the safe haven it once was, although dedicated activists are doing their best to bandage the bleeding wound that is education in Syria today.