Casablanca - The body of Mohammed Abu Khdeir, a Palestinian teenager, has finally been released to the family. 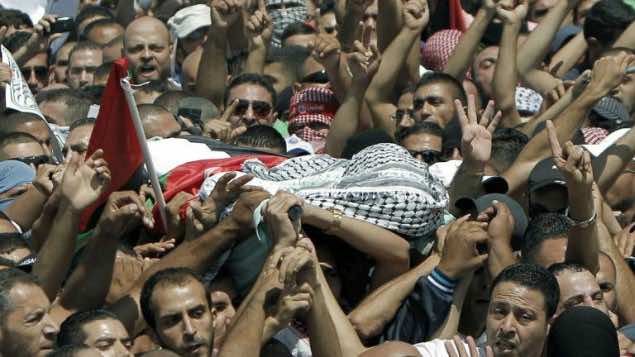 Casablanca – The body of Mohammed Abu Khdeir, a Palestinian teenager, has finally been released to the family.

After the Friday prayers, thousands of mourners attended Abu Khdeir’s funeral. The coffin of the 16-year-old, wrapped in a Palestinian flag, was first carried to his family and then to the cemetery.

The dead teenager’s mother, Suha Abu Khdeir, was quoted by Euronews as saying: “I hope no mother will have to face what I’m going through now. I want people and the leaders to make a stand, to put an end to these kinds of acts so no other woman suffers like this.”

The body of the Palestinian teenager had been autopsied, but the Israeli police are keeping its results from the public. However, it has been revealed that the body indicates marks of burning and other forms of torture.

Jerusalem’s tensions have given cause for the population as well as the police to worry. For this reason, authorities are prepared to deal with any troublemakers in order to impede further chaos and clashes from arising.

Many are convinced that the murder of Abu Khdeir was a revenge attack for the recent brutal killing of three Israeli teenagers in Hebron in the occupied West Bank.

For the moment, police continue to investigate whether the crime was nationalistic or criminal in order to determine whether the perpetrator or perpetrators are Israeli or Palestinian.

The ongoing hatred and conflicts between Israelis and Palestinians have taken the lives of many people, especially children.