Azrou - A fierce fighting took place in the Maadeed neighborhood in Rabat between dozens of inhabitants and Sub-Saharan African immigrants. Knifes, swords, iron rods and batons were used in the fight while stones were thrown from windows and rooftops. 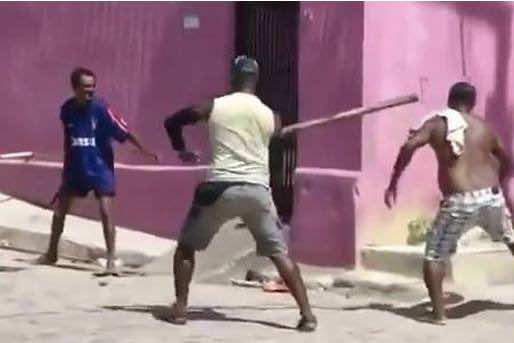 By
Sofia Sabi
-
Sofia Sabi is Master a student at King Fahd school of translation in Tangier.
Jul 7, 2014

Azrou – A fierce fighting took place in the Maadeed neighborhood in Rabat between dozens of inhabitants and Sub-Saharan African immigrants. Knifes, swords, iron rods and batons were used in the fight while stones were thrown from windows and rooftops.

According to Al Massae daily, the confrontation began after a misunderstanding between a Moroccan and a Sub-Saharan African immigrant and heightened into brawl creating a state of terror in the surroundings.

The Sub-Saharan African immigrant gathered more than 15 illegal immigrants to take his side but was surprised by the resistance of his opponent’s neighbors who came to the defense of the Moroccan.

Matching sources revealed that this incident was not the first of its kind. Neighborhoods like Dwar Doom, Maadeed, and Dwar Hajja are highly susceptible areas in terms of security allowing for a dangerous atmosphere and violent confrontations.

Two days ago, the area witnessed clashes between 15 immigrants from different nationalities for unknown reasons. Two weeks prior, the area was spared a nearly deadly confrontation between Sub-Saharan African immigrants and young Moroccans from the Taqqadum neighborhood.

The sources added that this situation is creating congestion in the marginal neighborhoods of Rabat, known to be refuges for hundreds of illegal immigrants, adding that the tensions are expected to worsen between the two parties.

According to one of the neighborhood residents, some immigrants are peaceful, harmless and strive to make a living by working in parking lots. However, many immigrants have became a source of worry for these areas’ residents because of dangerous practices including drug and alcohol trafficking, as well as aggressive behavior which further provokes the Moroccan population.

The same source warned that the continuation of such obstructive environments could result in difficulties for Moroccan and Sub-Saharan African immigrants’ coexistence in these neighborhoods. According to “Abdelwafi Ftit, a Rabati official, “the situation is like a ticking bomb.”