Rabat  -  Morocco strongly condemned the two terrorist attacks which targeted on Friday a Saudi security patrol near the border crossing of Al-Wadiaa and a government building in southern Saudi Arabia. 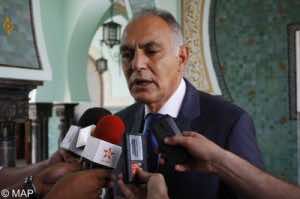 Rabat  –  Morocco strongly condemned the two terrorist attacks which targeted on Friday a Saudi security patrol near the border crossing of Al-Wadiaa and a government building in southern Saudi Arabia.

The Ministry of Foreign Affairs and Cooperation said in a statement that “following the two terrorist attacks which targeted a security patrol near the Saudi border crossing Al-Wadiaa and a government building in the south of Saudi Arabia, the Kingdom of Morocco expresses its strong condemnation of this despicable terrorist act aimed at undermining the security and stability of the country and the security of its citizens.”

“The Kingdom, which extends its sincere condolences to the families of the victims of these attacks, reiterates its full support for the Kingdom of Saudi Arabia in the  fight against terrorism, and the preservation of peace and stability,” the same source added.