Rabat - Germany have a clear chance to lift the world cup trophy for the first time since 1990, after they destroyed host country Brazil with an outstanding 7-1 in the semi-final clash at Estadio Mineirao in Belo Horizonte on Tuesday. 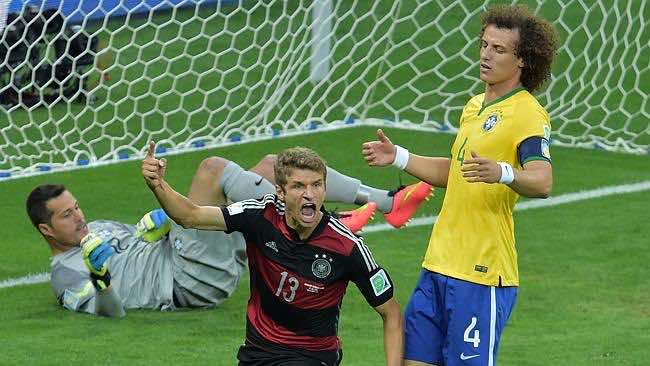 Rabat – Germany have a clear chance to lift the world cup trophy for the first time since 1990, after they destroyed host country Brazil with an outstanding 7-1 in the semi-final clash at Estadio Mineirao in Belo Horizonte on Tuesday.

Joachim Low’s side took great advantage of the absence of Captain Thiago Silva due to suspension, and Brazil’s talisman Neymar who suffered a fractured verterbra during the selecao’s quarter-final face-off against Columbia.

Germany started their ruthless campaign early as Bayern Munich’s Thomas Muller put his team ahead just 11 minutes after the start whistle. 36-year-old Klose netted the second goal which crowned him the top scorer with 16 goals that he scored throughout four World Cup tournaments.

The Germans continued shelling Julio Cesar’s nets in the second half with substitute Andre Schurrle scoring a double, leaving the hosts with their biggest World Cup loss since they lost to France 3-0 in the 1998 final.

Brazil’s Oscar pulled a late goal, but it was with no value as the hosts are out of the World Cup with the most humiliating semi-final loss ever.

Germany will face the winner from Argentina vs the Netherlands second semi-final clash in Sunday’s final at the Maracana Stadium in Rio de Janeiro.