Washington DC - The death toll and casualties continue to rise Thursday as Israeli missiles rain down on Gaza, killing more than 80 and injuring more than 500 Palestinians, including women and children, according to the Palestinian Ministry of Health. 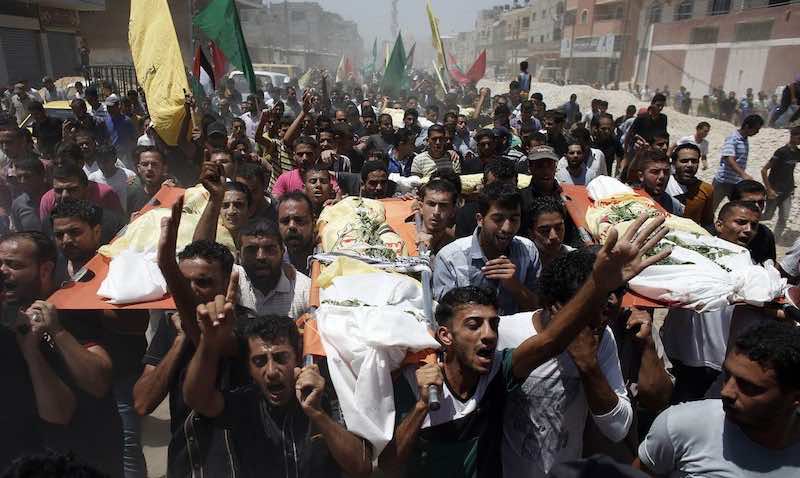 Washington DC – The death toll and casualties continue to rise Thursday as Israeli missiles rain down on Gaza, killing more than 80 and injuring more than 500 Palestinians, including women and children, according to the Palestinian Ministry of Health.

Early morning attacks Thursday killed 26 Palestinian, bringing the death toll to 81. Nearly half of the casualties have been confirmed as women and children, according to the Gaza Health Ministry.

Nearly 750 sites have been hit by Israeli jets, including Gaza City, Beit Hanoun and Khan Younis. In the last 24 hours alone, there were 320 strikes in Gaza.

In a meeting Thursday, Israeli Prime Minister Benjamin Netanyahu was reported saying, “I am not talking to anybody about a cease-fire right now. It’s not even on the agenda.”

“Despite the fact it will be hard, complicated and costly, we will have to take over Gaza temporarily, for a few weeks, to cut off the strengthening of this terror army,” Intelligence Minister Yuval Steinitz told Israel Radio.

The revenge killing of Muhammad Abu Khdier, followed by the beating of Tariq Abu Khdeir led to clashes between Palestinian protesters and Israeli security forces. On Monday, Hamas responded to the crackdown in the West Bank and fired rockets into Israel, who then retaliated by beginning what officials in Jerusalem said would be an “open-ended offensive aimed at crushing Hamas.”

Israeli authorities say more than 400 rockets have been fired into Israel from Gaza, many which have been intercepted by the Iron Dome anti-missile system, the air defense system designed to intercept rockets fired from 3.4 to 43.4 miles away. No serious casualties have been reported on the Israeli side.

Meanwhile, Egypt has opened the Rafah border crossing to Gaza to receive injured Palestinians. Al-Arabiya reports that hospitals in north Sinai have been placed on standby to receive the Palestinians. Gaza hospitals have been struggling to treat the wounded, with limited medicine and supplies. They are missing about 30 percent of essential drugs, and 15 percent of what remains is expected to be exhausted within days, according to an Al-Jazeera interview with Gaza’s Health Ministry spokesperson.

This offensive has set off the heaviest fighting since an eight-day battle between Israel and Palestine in November 2012, which ended with a cease-fire brokered by Egypt.

United Nations Secretary General Ban Ki-moon warned that the region “cannot afford another war” and has urged Israel and Palestinian militants to end hostilities. The situation in Gaza “is on a knife-edge,” he said.

The campaign Defense for Children International Palestine said it has verified the deaths of 14 children. Below is the list:

Children killed in on Wednesday