Morocco World News
Home Highlights on Morocco King of Spain’s 1st visit to Morocco, to give more impulse to...

Madrid - The official visit that King Felipe VI of Spain will be paying to Morocco, on July 14, few days after his enthronement reflects the two leaders' common will and resolve to give more impulse to the excellent strategic bilateral relations and consolidate the neighborliness bonds, said Morocco's ambassador in Spain, Mohammed Fadel Benyaich. 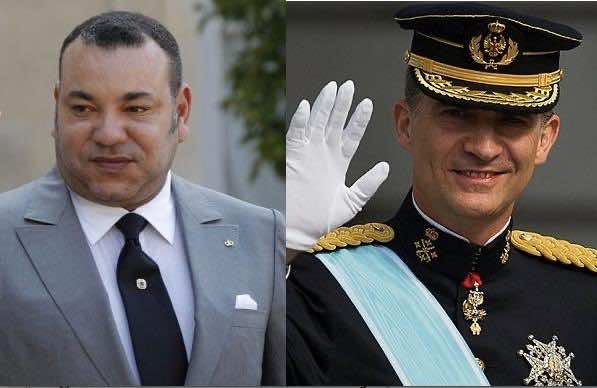 Madrid – The official visit that King Felipe VI of Spain will be paying to Morocco, on July 14, few days after his enthronement reflects the two leaders’ common will and resolve to give more impulse to the excellent strategic bilateral relations and consolidate the neighborliness bonds, said Morocco’s ambassador in Spain, Mohammed Fadel Benyaich.

“The visit has a tremendous importance for the two countries and for the two friend people and confirms the friendship, cooperation and mutual respect relations binding Morocco and Spain and the two Royal families,” the diplomat told MAP.

A release of the Moroccan ministry of Royal household, protocol and chancellery announced this Wednesday that King Don Felipe and Queen Dona Leitizia of Spain, will pay an official visit to Morocco this July 14-15 upon the invitation of King Mohammed VI.

The visit also reflects the strong and friendly personal ties existing between the two Sovereigns and the excellent economic and political ties uniting Morocco and Spain, said the ambassador who also noted that the Spanish Royal couple’s first visit to an African and Arab country which is taking place one year after King Juan Carlos of Spain visited Morocco, is part of continuous and permanent contacts between officials of the two countries for the consolidation of bilateral ties, based on mutual respect, confidence, win-win cooperation and transparence.

The Moroccan ambassador also argued that the “excellent ties of brotherhood” linking the two royal families are an asset in the vibrant bilateral cooperation that helps overcome “hardships that might arise sometimes”, adding that King Mohammed VI and King Juan Carlos had always been keen on maintaining permanent contacts between governments of the two countries.

According to Banyaich, the same keenness was confirmed by the new Spanish King who followed his father’s footsteps and chose to visit Morocco for one of his first travels abroad after the Vatican and Portugal.

“Presently, relations between Morocco and Spain are excellent,” said the ambassador who recalled the numerous exchange of visits between officials of the two countries in the last years.

Spain has also become Morocco’s first trade partner, ahead of France and the two countries have also intensified political, economic, social, cultural and human cooperation, said the ambassador, noting that the two countries are also endeavoring to explore new cooperation perspectives to take on the 21st century challenges.

He pointed out, in this context, to the King’s vision to create a new space of shared prosperity and wealth-creation between Morocco and Spain.

The ambassador went on that the upcoming meeting of the high-level commission, slated to take place shortly in Spain, will lend new dynamism to bilateral ties and reflect the joint will to build mutually-profitable partnership, under the insightful leadership of HM King Mohammed VI and King Felipe VI of Spain.

King Mohammed VI will hold talks with his illustrious guest and host, at the Royal palace of Rabat, an official Iftar (fast-breaking meal), in honor of the Spanish sovereigns and the delegation accompanying them.