Azrou - Throughout their school years, twin sisters Salma and Soumaya Al Ahmadi were known for their excellence. As expected, the day of their baccalaureate exam, both girls scored high in all subjects— with the exception of philosophy. 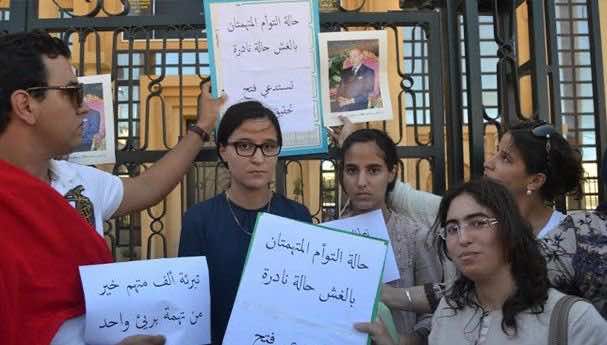 By
Sofia Sabi
-
Sofia Sabi is Master a student at King Fahd school of translation in Tangier.
Jul 12, 2014
Spread the love

Azrou – Throughout their school years, twin sisters Salma and Soumaya Al Ahmadi were known for their excellence. As expected, the day of their baccalaureate exam, both girls scored high in all subjects— with the exception of philosophy.

Recognizing suspicious patterns in the two’s scores in the philosophy section of the test, the scorer assigned them a score of 0/20. Consequently, the sisters were prohibited from taking the makeup test.

Salma and Soumaya disagree with the decision and it will mean that they will have wasted an entire year of their education if it stands. They brought their case to court, which issued a ruling in their favor. But to the twins’ dismay, the Ministry of Education refused to implement the court’s ruling.

In an interview with Medi1 TV, the twins’ lawyer Morad Zerzori claimed the Ministry’s refusal to implement the court’s decision is unjustified and based on unsound facts. He had expected the Ministry to comply with the judicial ruling and allow the twins to retake the test instead of repeating the academic year. However, the Ministry’s actual decision forbids the sisters from taking the baccalaureate exam for one year.

While the exam administrator claims that the twins exams contain matching ideas, Morad Zerzori notes that the sisters’ introductions and conclusions were completely different. The similarities lie in the analyses and citations, which is permitted under the exam laws. Morad Zerzori adds that as twins, Salma and Soumaya Al Ahmadi live under the same roof, use the same books, and refer to the same reference materials to prepare for exams. Their lawyer adds that the twins have consistently earned similar grades, the difference never exceeding a half-point.

The Ministry of National Education has confirmed in a statement that changes in decisions regarding cheating are not possible. Only the Regional Academy for Education and Training has the authority, under Article 105 dated 6 May 2014, to reverse decisions made against those accused of cheating.

The Ministry also highlights that during the correction process, the scorers found matching answers on the twins’ answer sheets. The Regional Academy for Education and Training indicated that exams undergo correction anonymously.

The Ministry’s decision has failed to put an end to the twins’ case as protest amongst the twins’ supporters continues to heighten. In response to the protest, the Ministry replied that their verdict ensures the credibility of the results, as well as equal opportunity for students. The Ministry reported that they will not address grievances that are incompatible with the morals and educational values that Moroccan schools seek to consolidate in society. The Ministry confirmed the Regional Committee’s decision to prevent the twins from participating in the retake session.

Salma and Soumaya have reached out to their supporters through YouTube claiming that given tightly controlled exam room conditions, it would be impossible for them to copy from each other. Moreover, the sisters state that they always prepare for exams together from the exact same references and that their writing style is almost the same. The twins even share a Facebook account and a single cell phone. The two sisters provided, as proof, copies of their previous exams in philosophy in which the analysis and ideas were similar.

The two sisters are distraught since they hoped to achieve high scores on the baccalaureate and continue their studies at the best schools available to them. Salma and Soumaya are convinced their only crime is that they are twin sisters.