Rabat - This has been a spectacular World Cup. From Spain’s elimination in the group stage to the Netherlands-Costa Rica penalty shootout to the 7-1 German victory over Brazil, the 2014 matches have supplied weeks of surprises and drama. 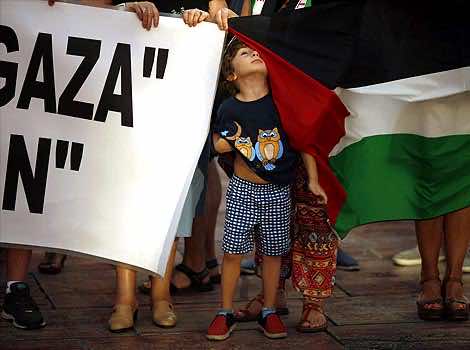 Rabat – This has been a spectacular World Cup. From Spain’s elimination in the group stage to the Netherlands-Costa Rica penalty shootout to the 7-1 German victory over Brazil, the 2014 matches have supplied weeks of surprises and drama.

I’ll be the first to admit to reveling in collective shouts of joy and deception in front of the TV and in public celebrations in the streets. I’ve been a Facebook maniac throughout, finding any excuse to post comments and status updates during each and every match. You know you’ve gone overboard when your children, themselves candidates for social media detox, complain that you’re spending too much time on your Smartphone.

But now is when my enthusiasm comes to an end. Ironically, on the same day the World Cup began three Israeli teenagers were abducted. Tensions in the region continued to intensify and eventually erupted this past Tuesday when deadly air strikes were launched in Gaza. With the acceleration of the violence, Facebook posts on the offensive began to appear with increasing frequency alongside posts on the World Cup. Stories of homes destroyed, statistics on the number of deaths – currently estimated at 121 – and photos of children killed by missiles. It just doesn’t sit right to be liking and posting on an unfair yellow card, a missed corner kick, or Ronaldo’s physique when just below and above in the Newsfeed tell a story of devastation happening when millions of eyes are turned elsewhere.

I can’t help but wonder about the extent to which those responsible for the violence are taking advantage of our global distraction with the World Cup to act with impunity. Think about Putin with the Olympic Games. Sports, according to the United Nations, are supposed to create a safer, more secure, more sustainable, more equitable future. For this to be a reality, we cannot allow every global sporting event to become an invitation to States to commit gross human rights violations while people around the world are glued to their televisions.

It’s great that the offensive in Gaza is generating so much press coverage and social media chatter. Let’s see if we can do more. Raising awareness, sharing information, and expressing outrage can and should be followed up with concrete acts to demonstrate that we are serious in our condemnation. If millions of people around the world can jump and shout in sync at a bad call by a soccer referee, then surely we can collectively shout and raise our fists at children getting killed in their own homes.

I’m not quite convinced of the willingness or capacity of our national governments to intervene to put a stop to this without a push from those undemocratic institutions that have appropriated the purse strings and the decision making in this new global economy. Those who have the most to earn off of our global distraction, especially the FIFA and beIN Sports.

That’s why I’ve signed the “Don’t Be Distracted” petition at change.org and will find something else to do on Sunday night other than watching the World Cup final.

The only red cards distributed on Sunday night should be for violence. The only victories I’m interested in seeing are for collective action and peace.