Azrou - Abdulsalam Sidiqi, the Moroccan Minister of Employment and Social Affairs, welcomed Dwight Bush, the U.S. Ambassador in Morocco on Thursday, at the headquarters of his ministry in Rabat. 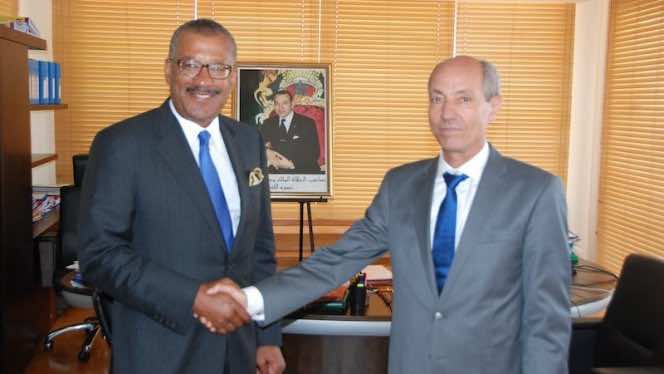 By
Sofia Sabi
-
Sofia Sabi is Master a student at King Fahd school of translation in Tangier.
Jul 12, 2014
Spread the love

Azrou – Abdulsalam Sidiqi, the Moroccan Minister of Employment and Social Affairs, welcomed Dwight Bush, the U.S. Ambassador in Morocco on Thursday, at the headquarters of his ministry in Rabat.

During their first meeting, both the Minister and the Ambassador praised the relationship between the Kingdom of Morocco and the United States of America. They reviewed the fields of cooperation between the two countries, and expressed the willingness of both sides to promote economic cooperation and trade.

Sidiqi said that one of the main objectives of the Moroccan government is to promote the creation of job opportunities and fight against unemployment.

He went on to say that his ministry is currently preparing a national strategy for employment that should be ready in October 2014. This strategy will primarily work on giving priority to sectors that create job opportunities.

He also pointed out that the Ministry will organize a school day to assess the Labor Code in September 2014. The Ministry has prepared laws to compensate for job loss by employing domestic workers, promoting synergy, as well as launching a program for local development initiatives through regionalization and decentralization in the field of employment.

On the other side, the American Ambassador praised the economic and social reforms carried out by the Moroccan government.

He also emphasized the projects supported by the U.S. and the Ministry of Employment and Social Affairs in Morocco, which have a positive impact on youth and on the most vulnerable social groups.