Tinejdad, Morocco- Teresa Rodriguez, Spanish member of the European Parliament posted yesterday a photo on her official Facebook  page wearing "Free Palestine" T-shirt in solidarity with ??Gaza? during the meetings of the House of Representatives of the European Union. 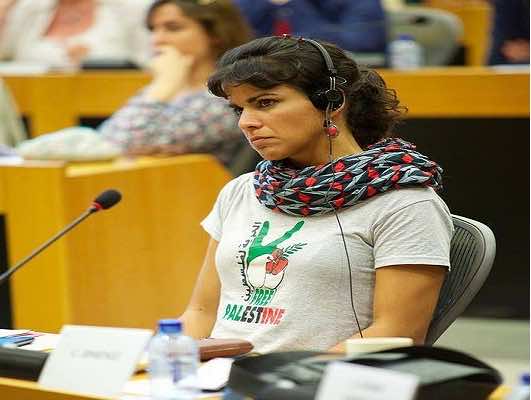 By
Larbi Arbaoui
-
Larbi is a freelance writer and assistant editor at Morocco World News.
Jul 15, 2014
Spread the love

Tinejdad, Morocco- Teresa Rodriguez, Spanish member of the European Parliament posted yesterday a photo on her official Facebook  page wearing “Free Palestine” T-shirt in solidarity with ??Gaza? during the meetings of the House of Representatives of the European Union.

The photo of the Spanish member of the European Parliament went viral on social media.

Many social media users expressed their deep appreciation of the solidarity of the Rodriguez with the Palestinian cause.

The photo generated a lot of comments and was shared by many people.

Thank you from Palestine and all Palestinian all over the world,” wrote Tariq Syd.

This is not the first time that Rodriguez supports the human rights of the Palestinian people. Her Twitter account is full of pictures and tweets that defend Human Rights in general and the Palestinians cause.

The activist recently tweeted “The situation in Palestine is desolate. 172 dead and 1,230 injured after a week of bombing.”

Teresa Rodriguez is an “Anti-capitalist, MEP of Podemos, high school teacher, and an activist in Marea Verde and the feminist movement,” as she wrote on her Facebook page