Casablanca - Malala Yousafzai, a Pakistani education activist, travelled to Nigeria to give hope and strength to the concerned families at an international hotel in Abuja, the capital city of Nigeria. 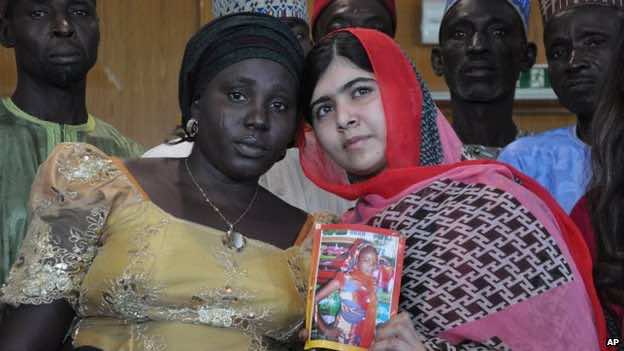 Casablanca – Malala Yousafzai, a Pakistani education activist, travelled to Nigeria to give hope and strength to the concerned families at an international hotel in Abuja, the capital city of Nigeria.

During her visit, she aims to campaign on behalf of the Nigerian kidnapped girls to appeal for their release and their right to education.

Viewing the abducted girls as her sisters, the young Pakistani activist declared: “ I am going to stand up for them.”

Malala Yousafzai is a 17-year-old activist known worldwide. In early 2009, young Yousafzai anonymously wrote a blog for the BBC detailing her life under Taliban rule while promoting her views on women’s education. In 2012, she barely survived 3 gunshot wounds inflicted by a Taliban hit-man in Pakistan. Activists hope that Malala’s activism in Nigeria will help bring the girls back to their homes.

At a small gathering in the hotel’s conference room, Malala, her father and relatives of the kidnapped girls gathered with the intention of spreading more awareness and putting more pressure on the local government. Malala also granted the families with moral support by talking about her incident and how important it is to speak up for one’s right.

90 days of uncertainty of their daughters’ futures has left a lot of parents on the brink of despair.

According to BBC World News, one father of the abducted girls stated: “Is it because we’re [a] poor country people that the government isn’t doing anything? Suppose these were the daughters of someone important; would they still be in the forest after 90 days?”

Although Boko Harram proposed to free the girls in exchange for the government to release its men from prison, the Nigerian army opposed the deal.

The viral #BringBackOurGirls social media campaign has already reached numerous celebrities and non-celebrities, pressuring the government to bring back the girls in a healthy condition.