Fez - In an interview with the Telesur TV channel in Venezuela, Diego Armando Maradona declared that Lionel Messi does not deserve the golden ball award as world cup best player. 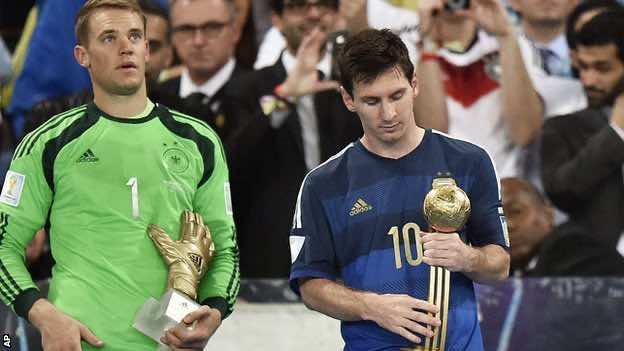 Fez – In an interview with the Telesur TV channel in Venezuela, Diego Armando Maradona declared that Lionel Messi does not deserve the golden ball award as world cup best player.

The footbal legend, known for his divisive and controversial statements, stated that Leonel Messi was not good enough to attain this honorable title.

Former Argentinian star added in ‘El Zurda’ program that it was a set plan to grant Messi this trophy as part of a merketing agenda. Stating meanwhile that he would give Messi the best prize possible because he is a great player.

Maradona has also levelled some criticism against Argentine manager, Alejandro Sabella, espicially for substituting Ezequiel Lavezzi for Sergio Aguero in the wold cup Final, a decison Maradona deemed a decisive mistake as Lavezzi was more effective than Man. City’s striker.

In a press conference following the end of the world cup, FIFA president told journalists that he did not expect such a nomination, claiming that he would but confirm to it as his position dictates.