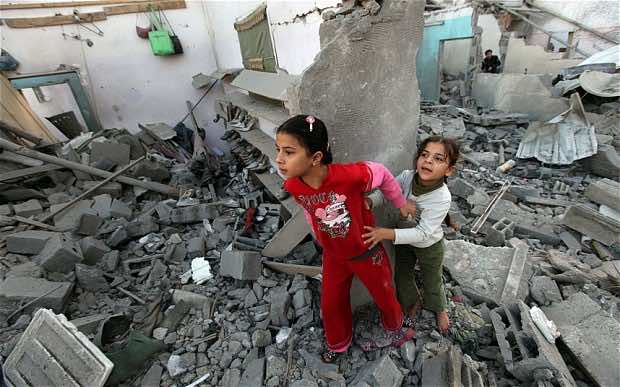 “For the people who asked me about what is happening in Palestine right now: I thought of finding the strongest words to describe how it feels to have your people being murdered and punished by an occupation that has been continuously committing crimes against civilians. But I found that words will never make people know how I feel when I call my family members who live in Gaza and they tell me they can’t sleep at night because they don’t know if they are going to wake up alive the next morning.” –Muath Ibaid, Facebook status.

For Ahmad Saleh, a young man who lives in northern Gaza, there is nowhere to run.

“Where do I feel safe? I don’t know how to answer that…all I have is my house, and even that is not safe. There is nothing else,” he said in a Skype interview.

Part of his house has been damaged. He constantly hears bombs, some landing as close as 100 meters from his home.

Since the start of the offensive, more than 500 Palestinians—mostly civilians—have been killed and more than 3,000 injured, according to Gaza health officials. Twenty Israelis, including two civilians have died. The UN agency for Palestinian refugees UNRWA has opened 61 of its schools for more than 80,000 people.

Sunday, Gaza endured its deadliest day, with the death of at least 120 Palestinians as Israel continued to escalate its military onslaught.

“The corpses of women and children were strewn in streets of Shujai’iya as people fled on foot and packed into vehicles,” according to The Guardian.

Protests around the world call for Israel to end this massacre, yet Israel continues to expand its offensive, blaming Hamas for using civilians as human shields. However, reports indicate that more children have been killed than Hamas militants.

Tyler Hicks, a New York Times photographer who captured the aftermath of an Israeli missile targeting four children on the beach wrote, “A small metal shack with no electricity or running water on a jetty in the blazing seaside sun does not seem like the kind of place frequented by Hamas militants, the Israeli Defense Forces’ intended targets. Children, maybe four feet tall, dressed in summer clothes, running from an explosion, don’t fit the description of Hamas fighters, either.”

The United States remains supportive of Israel’s “right to defend itself,” as both President Barack Obama and Secretary of State John Kerry have said repeatedly.

“The world thinks that we are terrorists, but we are not. We are humans like everyone else, but we are lacking our human rights. Gaza is striving to survive. This is not a war, this is genocide,” said Christina Yousef, a young woman living in the West Bank.

She said the life Palestinians live is one of constant fear and terror. “We try to live our lives normally, but we know that settlers can come and abduct or kill us any time.”

“The world must care not only because what is going on right now, but because of the daily life of Palestinians, especially in Gaza. We are the only people in the 21st century who are under military occupation with no control in any aspect of our lives. The world must care because their foreign policies and the Western double standards hurt the Palestinians,” said Zain Jarrar, a resident of Ramallah.

As of now, there seems to be no end to the fighting, although attempts to reach a cease-fire continue.

As Saleh writes in a Facebook status, “The smell of death is in every corner of Gaza.”