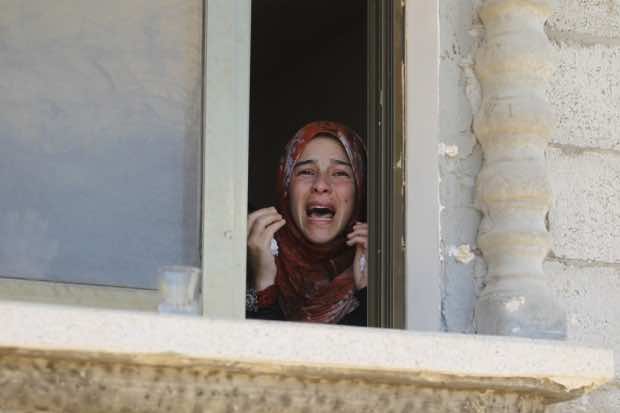 Rabat – Israel is not defending itself, but rather attempting to exterminate a nation with the support and blessing of traditional unconditional allies.

“Israel has the right to defend itself” and has been doing so by shelling and bombarding civilians, killing infants and children. Israel is waging war against a people that have no economic influence, no standing army, no warplanes, no tanks, no chemical weapons, no nuclear warheads, no warships, no real support in the world and no lobbies in the United Nations nor in the great powers. Israel has been attacking a people that has nothing but their voice to claim their land, who has been under occupation since Europeans unrightfully gave Arab land to the Jewish citizens other European governments deported, tortured and burned alive in attempt to exterminate them.

The Palestinians are innocent of these crimes yet are the ones paying for them in the form of ‘collateral damage’ in defiance of many United Nations resolutions, international law and political morality.

Recent history has recorded resistance actions in heroic light, but those resistances were in France and other European countries when Hitler marched into their lands, bombarded their cities, humiliated them, killed their youth and deported their Jews. Those were acts of heroism but when Palestinians resist occupation, in this case one that refers to itself as the Hebraic or the Jewish State, an occupation that oppresses them, puts them in prisons resonating with the essence of Hitler’s camps, kills their babies and destroys their environment; those who resist are called terrorists. Perhaps the occupier has never heard of Hitler or suffers from memory loss to remember what the Jews endured under his rule.

The images coming from the Gaza Strip serve as witness to the ugliness, immorality, inhuman and indiscriminate violence against civilians but do not tell of the suffering, the frustration and the loss of confidence and hope of a whole people. Palestinians (it is them we are talking and not Gazans alone), have shown plenty of patience, more than any people under occupation can be expected to show.

An unfortunate truth is that the transgression of international law does not have the same consequences everywhere and for everyone. In the case of Israel, not only is the law simply not enforced, but is as if Israel were an exception in the world community.

What must happen is that the red lines and the accusatory anti-Semite labels against those who criticize Israel must be removed. Standing against the state and the government of Israel is not a display of anti-Semitism neither is the condemnation of settlements on stolen Arab lands and opposition to Israel’s racist and apartheid-like policies. Israel is an occupying power comparable to Hitler’s Germany and Israel’s behavior towards Arabs and Palestinians are no different from that of the Nazis towards Semites. Either the Israeli leadership is in need of critical history lessons or the state has closed its ears to many Jews’ calls of just how un-Jewish the idea of a Jewish state is and about how irreligious Zionism is and how illegal and immoral what Israel has been doing to Palestinians and their land is.

History is being distorted as we speak as the Palestinian issue is reduced to Hamas; a resistance army led askew because of a worn-out patience. The Palestinian issue is being reduced to questioning a few desperate, miserable, useless missiles that miss their targets more often than reach them while the real issue is what right did the United Kingdom have to grant Zionists the land of Palestine and to provide them with the weapons, funds, and political and diplomatic support to shatter Arabs and take away their homes. The point, that the UK had no right to sign off Arab lands and is responsible for each and every act of violence that occurs and has ever occurred in Palestine, cannot be emphasized enough. The UK, and the UN later on, are responsible for the current situation and are responsible for ending the injustice. If for some reason, the thought that Palestinians will be silenced by the might of an army or by the economic and political pressure of Israel’s creators and allies crosses these Western powers’ minds, they would be well-advised to revisit history books as such thoughts are of little use.

Just as Europe resisted Hitler and was victorious, and millions of Arabs gave their lives so generously to free Europeans and their lands from Hitler’s Nazi armies, Palestinians will resist Israel’s Zionist armies and are determined to give their lives to free themselves and their land. They believe it their destiny to die for their land, their dignity and for their victory.

The issue now, however, is neither that of Hamas nor that of Palestine, it is one of humans being butchered and massacred in daylight. The issue is that those originally responsible for the conflict and many other countries that count themselves among the world’s democracies and promoters of human rights and international law are watching yet still repeating ‘Israel is defending itself’. Bullshit for when babies and children are killed in the most atrocious way possible every day and hospitals and residential quarters are targeted. What a shame, when the Israeli army uses Palestinian children as shields and pretends that it is Palestinians who use their own children as shields. What a shame when Palestinian homes and schools are targeted as missile launch sites while no Palestinian child has anywhere else to go because they are confined in the most densely populated region of the world.

Waters always find their way back to their beds. Occupation is doomed to meet resistance and end. Sooner or later, Palestinian refugees will be back in their homeland, the apartheid wall will be removed and the illegal settlements will be dismantled. All this is possible because there are people who are willing to pay the price it takes, who are romantic, who believe in ideals, who dream of freedom, who believe that dying for their country is worthwhile, who will not betray their nation and who have learned to distinguish between who allies and foes.

A just and lasting peace is the only alternative Palestinians will accept, no other solution forced on them will prevail. Anything but justice will result in more violence, more deaths and more insecurity for the whole region.