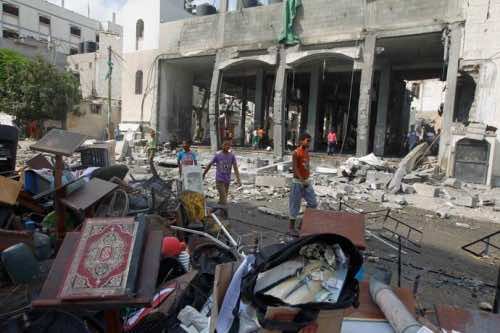 Rabat – “Israel has the right to defend its borders!” Assuming that is true, where are its borders? For this to be feasible, it would first have to withdraw to the 1967 borders.

President Obama and his allies in Europe know that Israel is not defending its borders. They know it has been pushing them deeper and deeper into Palestinian Territories for decades and unlawfully establishing settlements with their support and blessing. Israel is not defending its borders nor is it defending its citizens. It is extending them according to its agenda to realize the dream of the Great Israel. The occupying power is working to convince the world that it is entitled to it and that Palestinians are getting on its way.

History is obstinate and forgets nothing. The 1948 partition of the lands under the protectorate of the UK into an Arab and a Jewish state was but a compromise for the Labor Zionists, who, for strategic negotiation reasons, had to compromise their agenda for a Eretz Yisrael Ha-Shlema, literally the “Whole Land of Israel,” also translated as “the entire land of Israel” and more frequently referred to as the “Greater Israel.”

Since then, no Israeli government revoked the idea of annexing the territories that they refer to as Judea and Samaria (the West Bank) and they all continued colonizing Palestinian lands. The exception was perhaps Ehud Olmert, who is still paying the price for having suggested the dream of “Greater Israel” was over and that to keep talking about it would be mere deception. No wonder why he fell into disgrace!

Those negotiating peace with Israel, especially those talking of a lasting and just peace, need to take some time to study the Zionist literature. This will inform them that the “Greater Israel” actually means the “Promised Land,” although this term is not used as much to avoid its religious connotation.

They will learn that the zionists aim to get away with a much larger territory than what it is currently occupying in total defiance of international law and the relevant United Nations resolutions.

According to the Israeli interpretation of the Bible, it extends “from the brook of Egypt to the Euphrates.” Thus will comprise what is now Israel, the Palestinian Territories, Lebanon, Syria, Jordan, Iraq, Kuwait, Saudi Arabia, U.A.E, Oman, Yemen, a few provinces of Turkey, Sudan and parts of Ethiopia. This is the long-term vision of Israel. It is explicitly detailed in Zionist literature. Not taking it into account while trying to understand every move, every piece of discourse and every policy of Israel would be missing the real thing, and that’s a deadly mistake.