Fez - At last, a peace project may be be worked out to stop mass killings in Gaza after two weeks of war. 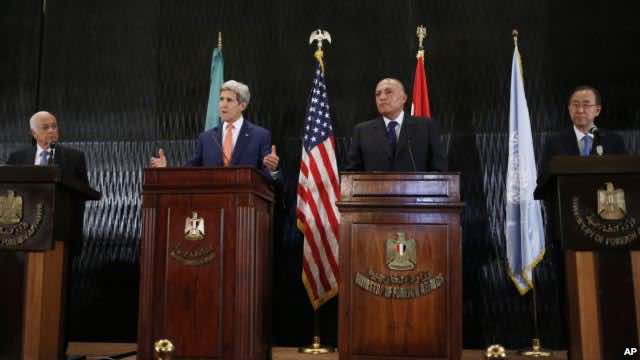 Fez – At last, a peace project may be be worked out to stop mass killings in Gaza after two weeks of war.

John Kerry seems to have finally taken action, presenting a plan for a ceasefire in the Gaza Strip. The United States has vowed to adopt this proposal and ensure success in partnership with world’s influential players.

The American proposal postulates a ceasefire for ‘humanitarian reasons’ after war has killed hundreds of civilians, mostly women and children.

Aljazeera reported that the American Secretary of State will present a “coherent” peace plan, urging concerned parties (Palestinian Authority, Resistance Factions, and Israel) to reach a ceasefire based on Cairo’s agreement in November 2012.

The prospective agreement is sponsored by several international powers, namely USA, Egypt, Qatar, Turkey, the UN, the EU, and the Arab League. It calls for an urgent meeting in 48 hours to negotiate sensitive issues pertaining to a long-lasting peace.

The US-proposed plan seeks to supervise parties’ compliance with the agreement and international partners’ provision of humanitarian supplies to the victims of the Israeli war on Gaza Strip.

But the proposal falls short of calling on Israel to put an end to its siege of Gaza, which has lasted for almost years, and turned this territory into the world’s largest open prison.