Tinejdad, Morocco - While the Israeli attacks on Gaza is still going on for almost three weeks, claiming the lives  at least 900 people so far, the photo of a Lebanese journalist kissing her Jewish boyfriend has gone viral on the Internet. 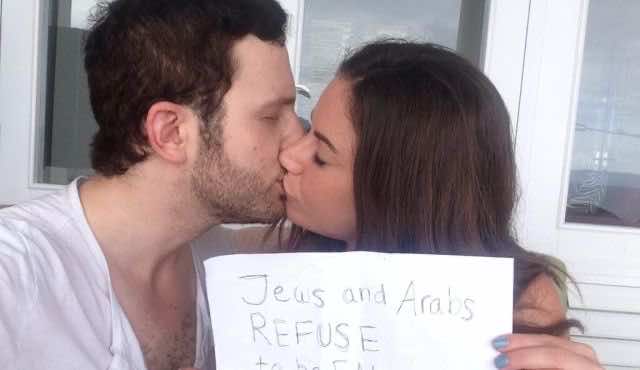 By
Larbi Arbaoui
-
Larbi is a freelance writer and assistant editor at Morocco World News.
Jul 26, 2014
Spread the love

Tinejdad, Morocco – While the Israeli attacks on Gaza is still going on for almost three weeks, claiming the lives  at least 900 people so far, the photo of a Lebanese journalist kissing her Jewish boyfriend has gone viral on the Internet.

Sulome Anderson, a freelance journalist based in Beirut and daughter of Terry Anderson, the former Middle East bureau chief for the Associated Press, posted a photo of her lip-locked with her American-Israeli boyfriend.

He calls me neshama, I call him habibi. Love doesn’t speak the language of occupation #JewsAndArabsRefuseToBeEnemies pic.twitter.com/CpqwxNM6ys

In response to the campaign, a twitter user posted a photo of apparently a Jew carrying a young boy on his shoulders with flags of Palestine everywhere in what it looks like a protest.

While many have responded to the campaign and posted their selfies on twitter, many others make fun of the campaign, and responded mockingly to CNN, questioning the ability of such campaign to bring peace to the Middle East and pave the way towards allowing the Palestinians to enjoy their inalienable rights.

Another tweet sarcastically reads, “Hi, I’m Palestinian and I don’t have a home or country for some reason?”

@cnnivideo @cnni “Jews and Arabs blah blah” Hi, I’m Palestinian and I don’t have a home or country for some reason?

Mohammed Mushtaq ruled out the possibility of such campaign to bring peace to the Palestinians.

@cnnivideo @cnni no it can’t, only international sanctions and action against apartheid isreal will.

Initiated by Abraham Gutman, an Israeli student living in New York, and his Syrian friend Dania Darwish, the campaign aims at building bonds of friendship and love between Arabs and Jews, using the hash-tag #JewsAndArabsRefuseToBeEnemies.