Fez - Taking advantage of his participation in a talk show about the war on Gaza on France 24 Arabic, Rachid Barbach, a Moroccan self-proclaimed Imam living in France, used all his wits and communication skills to argue the "right of Israel to defend itself against Hamas." 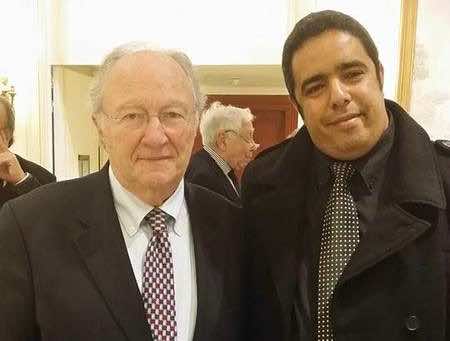 Fez – Taking advantage of his participation in a talk show about the war on Gaza on France 24 Arabic, Rachid Barbach, a Moroccan self-proclaimed Imam living in France, used all his wits and communication skills to argue the “right of Israel to defend itself against Hamas.”

Amid international outrage for crimes perpetrated against civilians Gaza by the Israeli war machine, a Moroccan imam in France adamantly defended Israel against Hamas. The vehemence with which Rachid Barbach defended Israel didn’t cover his many historical fallacies .

Rachid Birbach claimed that the conflict in Palestine is solely between Israel and Hamas, forgetting or intentionally overlooking the fact that Hamas is a resistance movement founded by the legendary Ahmed Yassine in 1987, but Israel has existed 1948. The well-documented atrocities and massacres committed against Palestinians in the West Bank and Gaza since 1948 were the reason behind the birth of Hamas. Hamas is just a reaction, not the source of the conflict in Palestine.

Rachid Birbach also argued that Hamas doesn’t want peace in the region, and clings crazily to the choice of war. What Rachid doesn’t know is that Israel is an occupying power that has exiled and dispersed millions of Palestinians from their homeland. Hamas is a resistance movement because wherever and whenever oppression exists it generates resistance.

Moreover, it’s clear that it is Israel who doesn’t want peace in the region (not Hamas). If there is anything Palestinians want, it’s peace. Israel has violated many peace agreements, international laws, international humanitarian law, and the Fourth Geneva Convention. Its record for violating of human rights in the Occupied Territories is well documented. If one reads the report of the UN-fact-finding mission established in April 2009 (better known as the Goldstone report), they learn about the atrocities and the human rights violations committed by Israel against the Palestinians with total impunity and disregard for international law and the relevant United Nations resolutions.

Another blatant fallacy is the claim that Palestinians suffer because of Hamas. Rachid Birbach continues to cover facts and manipulates reality. He omits the fact that Hamas was democratically elected by Palestinians in 2006 to govern in the West Bank and Gaza. He also turns a blind eye to the wave of support Hamas receives from Palestinians and non-Palestinians alike since Israel launched its deadly indiscriminate onslaught on the Palestinians on July 8.

The self-proclaimed imam unscrupulously and literally repeats the Israeli version of the story and claims that Hamas is using Gaza’s civilians as human shields. The shallow argument used by Barbash stands in contrast with the conclusions of the Goldstone report, which pointed out that Israel had deliberately targeted the entire civilian population of Gaza during its criminal Operation Cast Lead (December 27, 2008- January 18, 2009).

“While the Israeli Government has sought to portray its operations as a response to rocket attacks in the exercise of its right of self-defense, the Mission considers the plan to have been directed, at least in part, at a different target: the people of Gaza as a whole,” said the report.

The other two guests in the talk show, Adnane Ben Youssef from Tunisia and Rabia Hamou from Palestine, stood aghast as Rachid Barbach strongly spoke out in favor of Israel and in clear support of its crimes. To add insult to injury and to prove a his lack of good manners, Rachid provoked the other guests and claimed that the Israel-Palestine conflict is far beyond the understanding of normal minds.

Rachid Birbach’s arguments earned him much criticism on social networks. He was accused of putting the executioner and the victim on equal footing and speaking on behalf of Zionists.