Tinjdad, Morocco - The film "Adios Carmen", made by young Moroccan director Mohamed Amine Benamraoui won 1st Prize in the 18th edition of the Festival of Black Screens, which concluded Saturday in Yaounde, Cameroon. 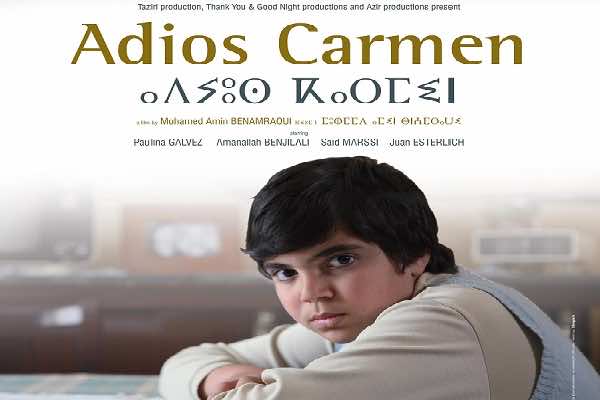 By
Larbi Arbaoui
-
Larbi is a freelance writer and assistant editor at Morocco World News.
Jul 27, 2014
Spread the love

Tinjdad, Morocco – The film “Adios Carmen”, made by young Moroccan director Mohamed Amine Benamraoui won 1st Prize in the 18th edition of the Festival of Black Screens, which concluded Saturday in Yaounde, Cameroon.

Shot in Amazigh (Rif variant), the movie “Adios Carmen” takes the audience to to the complicated life of Amar, a young boy in the Northern region of Morocco, Rif.

The 104-minute film tells the story of Amar, a child of ten years who lives alone with his violent uncle since his widowed mother left him to remarry another man in Belgium.

Waiting for the unlikely return of his mother, Amar met Carmen, a Spanish refugee fleeing the Franco regime, who works as “an usher at the village cinema.” She introduces him to cinema and gives him the motherly love that he was missing.

“This work sheds light on the ancient and complicated story that connects Spaniards and Moroccans, and highlights the need to tackle our common memory,” Mohamed Amine Benamraoui told the MAP.

Winner of the “Muhr Arab Special Mention” and the best feature in the Dubai International Film Festival 2013, the Moroccan film, which falls under the category of Drama, social, and family, reflects upon an important period in the history of Morocco and highlights cultural diversity in the Kingdom.