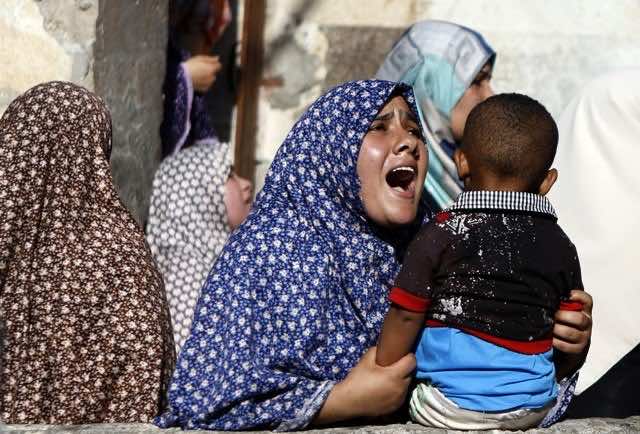 Benguerir, Morocco – The devastating war in Gaza has made it clear that human rights bear no more weight than mere words printed on blank sheets. Despite ‘human rights’, the Israeli military has demolished Gaza and turned it to hell.

The universal declaration of human rights repeatedly stresses that all people around the world have the right to live regardless of their race, language, and religion. But what is happening in Gaza tells another story. It tells the story of powerful countries repeatedly playing on the notion of human rights to serve their political and economic greed; ironically, these are the very countries who violate what this notion stands for. Media coverage attests to this since viewers watch as the death toll of children, women, elderly people, and even the handicapped rises daily; civilians killed in an unfair and unequal war with no action on behalf of those who can stop it.

War on Gaza has become an international matter. The world has witnessed countless demonstrations supporting the Palestinians’ right for defense, denouncing Israeli terrorism, and urging their government to take real and strong actions. This puts the Israeli government in an embarrassing situation given the fact that even non-Muslims are denouncing its disregard and contempt for human rights.

Arabs also have shown sympathy for and solidarity with Palestinians and have expressed their anger by protesting Israeli crimes and calling for an immediate ceasefire. They have strongly criticized the siege of Gaza and demanded that it be lifted to allow entrance of supplies to the injured.

Thousands of protesters worldwide took to the streets of their cities to urge the United Nations, whose mission is to maintain international peace and security, to pressure the Israeli government to stop this genocide and injustice. The Israeli government’s response to the world’s worries was that “war on terrorism will not stop until terrorism has been uprooted.” This trick has been exploited by Israel to deceive its citizens, as well as the so-called international community.

This can be debunked by simply comparing the number of casualties on both sides. To date, Israeli soldiers have killed more than one thousand Palestinians and injured five thousand; the majority of whom are children according to the Red Cross and NGO reports. Equally important to consider is that Israeli soldiers bomb houses, target correspondents and civilians, and shoot ambulances; the attack on Aljazeera’s office is a stellar example among many.

On the other side, the Israeli government has declared that 33 of its soldiers have been killed in this war. This ratio indicates that this is not war but rather slaughter of innocents because they happen to be there and because they have chosen to defend themselves.

In order to maintain its illegal hegemony, Israel as a Zionist country, kills and murders the other who is culturally and religiously different. In this regard, ‘human rights’ are no more than a collocation which powerful countries use to serve their agenda. Only when these countries differentiate between human rights, ideology, political and economic motives, may one dream to live in a world that genuinely respects human rights.