Rabat - New indisputable evidence of the war atrocities committed by the Israeli military against the Palestinian people in Gaza Strip. 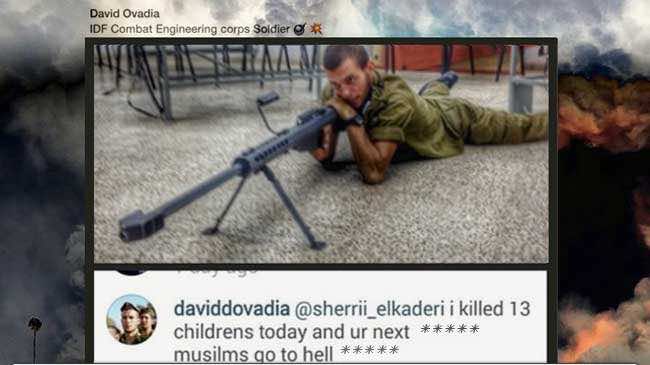 Rabat – New indisputable evidence of the war atrocities committed by the Israeli military against the Palestinian people in Gaza Strip.

An Israeli sniper has admitted to killing 13 Palestinian children in the Gaza Strip in one day, according to Iranian news channel Press TV.

David Ovadia, the Israeli sniper in question, posted on an Instagram account a photo of himself holding a sniper rifle and “bragging” about being capable of murdering 13 Gazan children in one day.

The image with his post, however, was deleted entirely by hackers from an anonymous group. The group has launched hundreds of attacks on Israeli websites over the past two years, Press TV added.

This comes at a time the Israeli Defense Forces say they have been only targeting Palestinian fighters from Hamas. Yet, the facts on the ground suggest otherwise.

On Wednesday, Israel shelled a UN school used as shelter in the Gaza Strip, killing at least 19 people and many others left with severe injuries.

The Israeli offensive on Gaza claimed the lives of more than 1,370 Palestinians, mostly innocent little children and women.

Deterred by the Palestinian resistance who they have confirmed had killed at least 56 Israeli soldiers, Tel Aviv mobilized 16,000 extra reservists for the ground military operations in Gaza, putting the total number at 86,000.