Tinjdad, Morocco - A 40-kilometer long fence with electronic sensors that Morocco has built on its eastern border has upset Algeria.

By
Larbi Arbaoui
-
Larbi is a freelance writer and assistant editor at Morocco World News.
Aug 1, 2014
Spread the love

Tinjdad, Morocco – A 40-kilometer long fence with electronic sensors that Morocco has built on its eastern border has upset Algeria.

French TV channel France 24, exploring the effect of the fence on Algeria, has reported that Algeria is “angered” by Morocco’s new strategy to protect its borders.

According to the French TV channel, the Algerian authorities consider the Moroccan measure to be an “accusation” against Algeria as being a regional exporter of terrorism.

Speaking to France 24 regarding Morocco’s initiative, Hadda Hazem, Director General of the Algerian newspaper Al-Fajr, said that she was not convinced by the reasons announced by Morocco to build the fence.

The journalist regarded the measure as a blow to both parties’ call for reopening of the borders.

The fence will cover vital strategic areas along Morocco’s eastern border with Algeria, and will cut off the route for smugglers who circulate illegally between the two countries.

In response to a question in the House of Representatives on the highest alert level set by Morocco to deal with terrorist threats, the Minister of Interior, Mohamed Assad said, “Morocco built a fence equipped with electronic sensors to protect against terrorist threats.”

The Minister of the Interior said earlier that the fence is equipped with electronic sensor detectors, which will be able to detect any terrorist threat targeting the Moroccan territory. He also pointed out that the fence will be able to monitor the movements of militants belonging to hardline organizations.

Morocco and Algeria Could Have Been Region’s ‘Largest Economies’: The Economist 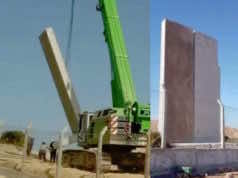