Vancouver - According to the Israelis, Gaza has been a ticking time bomb ever since January 2014. In early June, Hamas, the democratically elected Gaza party closed its financial banks. Hamas’ action was the outcome of a rift with Palestinian counterparts Fatah. Zilber states that 40,000 Hamas employees were deprived of their salaries for months due to financial malaise, while 70,000 Fatah ghost employees in Gaza were paid on time, as a result of Fatah pressure. 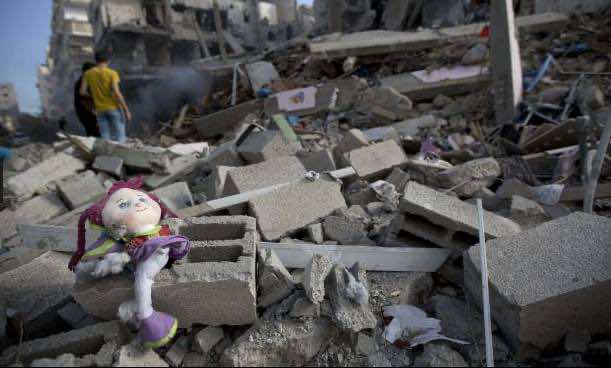 Vancouver – According to the Israelis, Gaza has been a ticking time bomb ever since January 2014. In early June, Hamas, the democratically elected Gaza party closed its financial banks. Hamas’ action was the outcome of a rift with Palestinian counterparts Fatah. Zilber states that 40,000 Hamas employees were deprived of their salaries for months due to financial malaise, while 70,000 Fatah ghost employees in Gaza were paid on time, as a result of Fatah pressure.

Hamas sources in Qatar had previously come to Hamas’ rescue in such cases, but with Sisi’s strong stance against the brotherhood, and his closing of the Rafah crossing, the Qatar originated money was no longer an option. Zilber argues that Hamas was put in a situation where a confrontation with Israel would be key to giving itself some leverage over the warden that manages the open-air prison it finds itself in. Many legitimate and fabricated accounts of aggression came from both sides, confrontations began, rockets and airstrikes were tossed, and the ruthless IDF launched a ground attack.

Israel’s split personality portraying its paranoia on global media, yet its audacity to spitefully aggress the most densely populated area in the world are enough to understand that its objectives are far from what they tell us in propaganda masked media. With all due respect, whom in a sane mind is going to believe that the death of three children, or the repeated launch of degenerate Hamas rockets is enough for Israel to be fine with losing 64 troops, one of which is equal to 1200 Palestinians?

Putting aside the bloodshed the media portrays, there seems to be a very interesting political game going on behind the scenes. It appears to be that as Hamas pursues its own political interests, its fight for economic relief happens to be what the Gazans want too. Hamas may be the prideful face to many Arabs in this conflict, but it is no doubt that the sheer coincidence that Hamas has its political interests perfectly aligned with the Gazans allows it to gather sympathy among the International community.

It is in the benefit of the doubt for me to argue that these political interests are directly correlated to the standard of life of the politically impotent Gazans that are victims of this ferocious aggression by an army substantially stronger than their inexistent one. It is however no doubt that both sides are accountable, and that I only chose to use the word aggression to bring to light an unfair battle, not a discriminatory approach. Coexistence to me has always been the keyword; I’ve seen it work beneath the eyes of my father and grandfather in Morocco.

However, I cannot fail to stress that the Israel-Palestine crisis is one so complicated that coexistence between the Muslim Brotherhood of Hamas and the Zionists of Israel, instead of that of the Muslims and Jews, will unequivocally lead to a cycle of vindictive nature. Point being that this political crisis has become one drowned in religious and ethnic tension, far from secularism.

I would like to once more restate that I am emphasizing on the socio-political aspect of this crisis rather than the humanitarian one. I am aware that the IDF has committed atrocities in Gaza, without turning a blind eye to the civilians of Gaza. The IDF and Hamas may claim nothing more than strategic and operational roles in this conflict. Knowing the history of this disputed land, however, the supposed strategic and operational objectives that have caused bloodshed have only contributed to fueling the hate of both parties and their people towards each other. This further extends to creating hate between both parties, hate that involves the aspects of identity, religion and race.

When religious affiliation, belief and race come into the equation of a crisis as such, the only light at the end of the tunnel for either party becomes the extermination of the other. The statements of Israeli Member of Parliament Ayelat Shaked referring to Palestinian mothers “Behind every terrorist stand dozens of men and women, without whom he could not engage in terrorism. They are all enemy combatants, and their blood shall be on all their heads. Now this also includes the mothers of the martyrs, who send them to hell with flowers and kisses. They should follow their sons, nothing would be more just. They should go, as should the physical homes in which they raised the snakes. Otherwise, more little snakes will be raised there,” are sickening to the bone, let alone those of the Hamas cleric stating that Hamas’ intentions are to “exterminate all jews,” or those of Israeli Sniper David Ovadia admitting to having murdered 13 children in one day . Hamas and Israel have arrived to a stage of hatred towards each other that can only be cured through violence. The destruction of UN shelters in Gaza, and Hamas’ modest capabilities yet stubborn attitude are enough to portray that neither party cares about the International community’s stance.

Conclusively, I see the beginning of the end approaching, and genocide engulfed in ethnic and religious hatred coming our way. The Rwandan genocide and the Holocaust were a result of racial hatred, the Bosnian-Serb one a result of religious hatred. As the media fools us day by day, we sit awaiting a one-state solution, when truly, we live in a world that in all aspects goes back to the survival of the fittest. Do the Arabs choose to wear their hearts instead of their political suits, and the world’s influential states choose to impose a solution, then maybe will there be a better outcome. A question I keep asking myself, however, is whether we are already living the modern-day form of genocide, one of religious and racial nature, but drowned in a political arena.