Meknes - American singer Madonna is again stirring controversy after she posted a picture on Instagram where she appears on the centre of two dancers bearing the Star of David and the Muslim star and crescent. 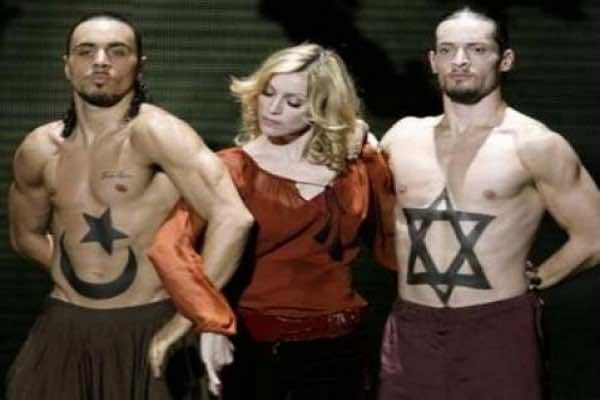 By
Larbi Arbaoui
-
Larbi is a freelance writer and assistant editor at Morocco World News.
Aug 4, 2014
Spread the love

Meknes – American singer Madonna is again stirring controversy after she posted a picture on Instagram where she appears on the centre of two dancers bearing the Star of David and the Muslim star and crescent.

The American singer, who earlier expressed her support for the Palestinian children who were massacred by Israeli attacks, posted a picture where she appears in the middle of two topless men with Islam and Judaism symbols and a statement calling for ceasefire.

The image stirred a controversial and fierce debate between pro-Palestine and pro-Israel supporters, who exchanged diatribes.

While the 55-year old American star called for “ceasefire on both sides”, she also demanded the support of the children of Gaza, who “need our support!” she tweeted.

Cease fire on both sides! The children of Gaza need our support! http://t.co/0Pzz11qBSg #ceasefire http://t.co/5wPLZEGXgI

At the height of the Israeli shelling on the Gaza strip, on July 23rd Madonna posted on her Facebook page a picture of colorful roses with the following statement: “These flowers are like the innocent children of Gaza! Who has a right to destroy them? No one!!!! CEASE FIRE! Peace in the Middle East.”

Responding to her tweet, many Twitter users thanked the American singer for voicing her concern about the Israeli aggression against Gaza children, while others lashed out at her and accused for being anti-semitic.

@Madonna bless you! However no ceasefire as long as Israel is hellbent on destroying human life. Case in point. pic.twitter.com/st8A7smeDn

Gina Christine, a Twitter user, insulted the singer and blamed her for being “anti-semetic and anti American”