Washington - Morocco's assets as an economic and financial hub for Africa were highlighted, Monday in Washington, in accordance with the strategic vision of King Mohammed VI for a south-south cooperation and solidarity-based win-win partnerships in Africa. 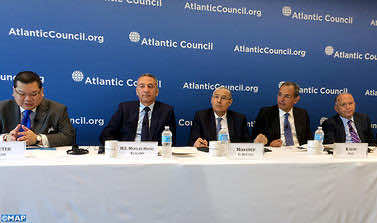 Washington – Morocco’s assets as an economic and financial hub for Africa were highlighted, Monday in Washington, in accordance with the strategic vision of King Mohammed VI for a south-south cooperation and solidarity-based win-win partnerships in Africa.

During an international conference organized by the US think tank Atlantic Council on the sidelines of the US-Africa Leaders Summit (4-6 August, Washington) and marked notably by the presentation of Moulay Hafid El Alamy, minister of Industry, Trade, Investment and the Digital Economy, participants underlined the success story of the Kingdom as an emerging platform for business in Africa.

Morocco has made a name of itself thanks to the Kingdom’s willingness to a liberal and open economy, said Elalamy, citing the multiple free-trade agreements signed with some 56 countries.

The Kingdom, which constantly manages to maintain macro-economic stability, has also a strong financial sector, said the Moroccan official, noting that over the past ten years, GDP growth has averaged 5 pc with a 2 pc inflation rate.

Thanks to its strategic geographical position as the closest country to Europe and its very strong relationship with partner countries, Morocco seems to be now a credible hub for economic world leaders which are already settling in the Kingdom.

“The emergence of the economic power of Morocco, initiated under the leadership of HM King Mohammed VI since his accession to the throne, is a key element of the royal strategy to consolidate relations of cooperation and solidarity with African countries” said Peter Pham, Africa Center director.

“Thanks to the vision of HM King Mohammed VI, Morocco leverage its emergence as an economic power to support the African strategy of the Kingdom”, explains the US expert.

As part of this “economic diplomacy,” the Sovereign announced in 2000 a debt-forgiveness plan for Africa’s least-developed countries, and the eradication of customs duties on products imported from these states, recalled Pham.