Casablanca - Ebola’s main source of outbreak stems from hunters, who kill and eat infected animals or merely touch the infected meat as they bring it to the market for sale. 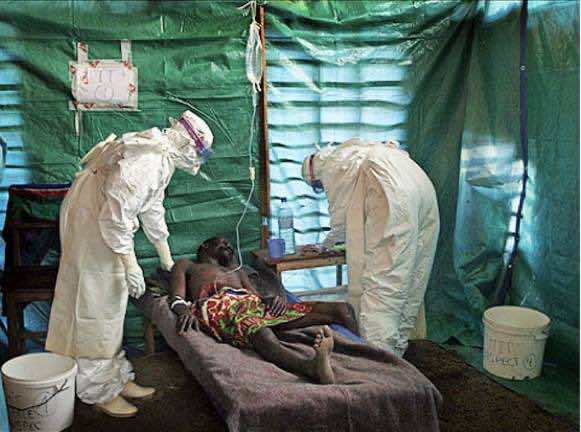 Casablanca – Ebola’s main source of outbreak stems from hunters, who kill and eat infected animals or merely touch the infected meat as they bring it to the market for sale.

The first human outbreak of Ebola on record was in Sudan and Zaire in 1976. Equally important to note, the virus is named after the Ebola River in Africa. Ebola is now an epidemic that could last years to fully be contained and the fear of a pandemic is not entirely unjustified as the number of infected inhabitants continue to rise slowly but surely.

Why is the Ebola virus so dangerous?

Ebola is highly contagious and causes high fever, severe vomiting, diarrhea, and external and internal bleeding however, the virus is not airborne. At present, neither vaccine nor therapy has been developed to counter Ebola. This is why nine of ten cases infected with the Ebola disease end in death. This is also why early treatment could be live-saving.

2. How is one infected with Ebola?

The virus is transmitted to people from infected live or dead animals and spreads via human-to-human contact. In most remote Central and West African villages, bush meat, the likes of which include monkeys and fruit bats, is a highly appreciated delicacy. Although, the virus can be killed when meat is cooked at high temperatures, contact with the skin of the animal is enough to transmit the virus.

Another trigger for the virus is the burial of an Ebola-infected individual seeing as traditionally, the deceased body is washed by friends and family. Even before death, the individual is tended to by friends and family for the duration of the illness. The virus is transmitted from direct physical contact with body fluids such as blood, saliva, stool, urine and sweat. These types of contact can cause a healthy person to be immediately infected.

3.Why are experts struggeling to fight this disease?

In the past, there have been few Ebola crises, though the present one is said to be the “largest Ebola outbreak in history”. Another problem is the lack of trust in western doctors inherent in many places where Ebola manifests. It is not yet widely accepted that in order to cope with the disease and develop the right vaccine, western medical technology is needed.

4. What are the symptoms?

Red eyes and skin rashes are the first signs of Ebola. However, these symptoms do not necessarily pertain to Ebola alone. Either way, tests can be conducted just a few days after the infection in order to determine whether or not the symptoms are triggered by the Ebola virus.

5. What is the danger for Morocco?

So far, the Health Ministry of Morocco has affirmed that no cases have been registered in Morocco. Nevertheless, sanitary check points and other precautionary measures monitor travelers from countries with recorded cases of Ebola before entering Morocco. In addition, it is highly advised to avoid travel to the concerned regions as long as the virus is still in circulation.