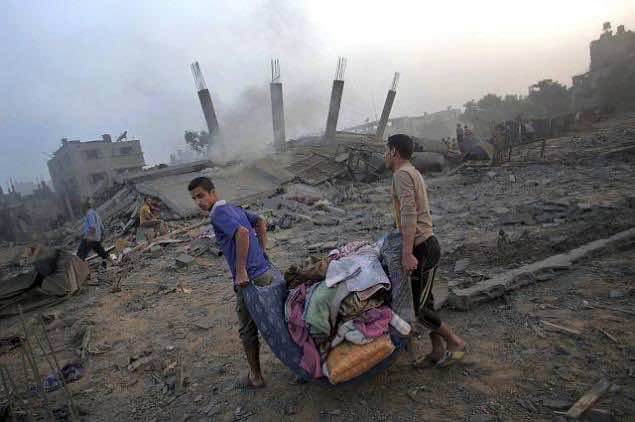 Rabat – The main functions of the United Nations are maintaining international peace and security, promoting human rights, and providing humanitarian aids. None of these functions seems to be exercised when it comes to the crisis in Gaza Strip. Once again, the Israeli regime has launched an all-out attack on Gaza. 1967 people have been killed in cold blood, 1700 of them defenseless civilians, and 400 innocent children.

Jens Laerke, spokesman for the U.N. Office for the Coordination of Humanitarian Affairs (OCHA), says that,“There is literally no safe place for civilians in Gaza,” as the hawkish regime has escalated its merciless military bombardment. More than 500 houses have been destroyed by Israeli air strikes. Gaza has been under heavy artillery fire for the last four weeks. Israel has shelled houses, mosques, hospitals, shelters, and UNRWA-run schools. According to UN reports, 90 UN premises and 134 schools have either been wiped out or severely damaged.

Modern concepts and notions such as security, peace, international law, human rights, democracy, and international organizations have been completely eradicated by Israel’s brutal atrocities with respect to the Gaza population. Such a loss is a stain on the world’s honor and should pique the world’s conscience.

In the view of some, Israel has far surpassed the barbarism of Hitler’s Third Reich with this latest barrage. Thousands of people have taken to the streets of many world capitals to condemn the killing of unarmed Palestinians. Demonstrators have carried signs such as “Down with Israel,” “Stop Israel state terror,” “I stand with Gaza,” “Gaza—end the siege,” and others.

Friday morning, August 8, saw the continuation of Israel’s thirst for bloodshed. A child was killed by an Israeli air strike prior to the end of the fixed-term truce. Meanwhile, most governments refuse to condemn Israel’s brutality against the Palestinians. In fact, the ignominious silence of the P5 —China, France, Russia, the UK, and the US— is not only legitimizing Israel’s inhuman acts, but also encouraging Israel’s deliberate and ongoing breach of international norms. Needless to say, billions of dollars and military support are annually given to Israel, allowing it to repeat hideous attacks on Gaza.

The angry voices of protesters have not done much to deter the Israeli regime. The current tyranny and oppression of Israel’s military attacks will not stop soon —unless the world calls Israel to account and puts the Israeli regime on trial.