Fez - Abderrahim Chikhi has been elected as the new head of the Movement of Unity and Reform after a long debate Saturday in the fifth general national assembly. 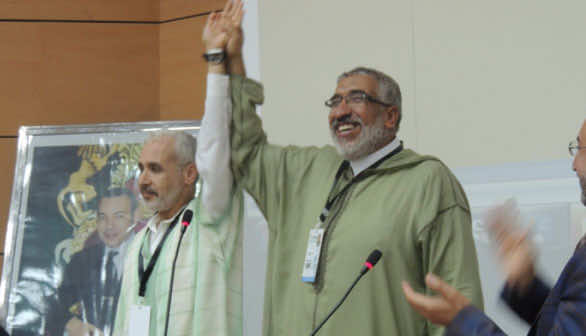 By
Larbi Arbaoui
-
Larbi is a freelance writer and assistant editor at Morocco World News.
Aug 11, 2014
Spread the love

Fez – Abderrahim Chikhi has been elected as the new head of the Movement of Unity and Reform after a long debate Saturday in the fifth general national assembly.

According to Attajdid, the Arabic media outlet of the Movement of Unity and Reform, after three rounds of voting and polling Abderrahim Chikhi received 296 votes, representing 55% of the total votes, while Ahmad Raissouni, his opponent, garnered 200 votes.

Chikhi, the adviser to Head of Government Abdelilah Benkirane, was elected head of the movement, after none of the five candidates was able to obtain an absolute majority.

During the first round of voting, Ahmad Raissouni headed the voting list with 340 votes, followed by Moulay Omar Benhammad with 322 votes. Aws Remmal came in third position with 209 votes, while Saad-Eddine El Othmani and Abderrahim Chikhi came in fourth position with 166 votes each.

During the discussions among the delegates of the assembly, Ahmad Raissouni apologized for not being able to assume the responsibility for his commitment and dedication to scientific research.

The former Minister of Foreign Affairs, Saad-Eddine El Othmani, also withdrew during the discussions, saying that he is already the head of the National Council of the PJD.

Mr. Abdelilah Benkirane had supported the candidacy of Ahmad Raissouni, saying that “Raissouni is the right leader for the movement in this period.” He noted that since the General Assembly has chosen Chikhi, the latter will be replaced by a new adviser to the Head of Government.