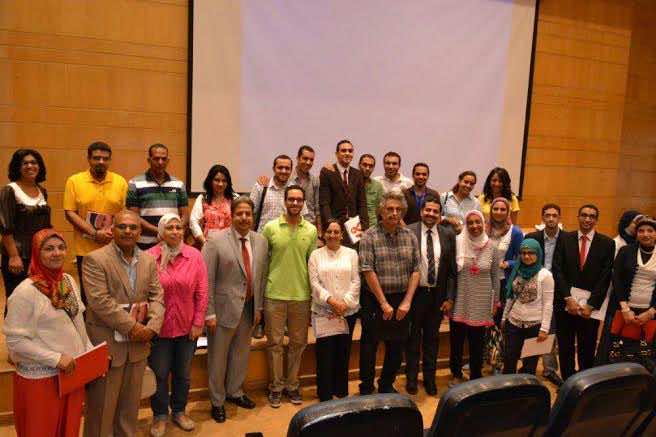 By
Menan Khater
-
Menan Khater received a bachelor of arts in journalism from Cairo University in May 2013, but she already has gained varied experience as a writer of news and features.
Aug 11, 2014
Spread the love

CAIRO — The United Nations program on HIV/AIDS in Egypt has announced today launching the second phase of a long term project that aims at enhancing the health care settings for people living with HIV/AIDS in Egypt.

The project is a joint collaboration between WHO, UNICEF, IOM, UNHCR and Qasr Al-Ainy Medical School and hospital.

Almost 30% of surveyed men and women living with HIV prefer not to attend a healthcare facility in fear of being stigmatized and rejected, while 73% of healthcare providers said they would refuse treating people living with HIV—according Ford Foundation reports in Egypt.

In February 2014, the Egyptian military research team came up with a machine that they claim will cure both viruses of HIV/AIDS and Hepatitis C within only 16 hours and only one hour to detect the disease. Medical Personnel widely perceived this invention as a “deception” especially after it was delayed for ‘further testing.’

Sayyedah Abdulateef, a Nursing Professor at one of the most prominent, public healthcare facilities in Egypt: Qasr Al-Ainy, and Head of Nurses at the UNAIDS collaborative program, told MWN “What’s more important than curing HIV/AIDS is preventing it. People refuse to disclose their status due to community stigma.”

She refers to the HIV/AIDS virus itself as an old phenomenon, however when people stopped talking about it, she says it has affected the safety conditions inside the hospital. Medical Personnel sometimes opt not to wear coats or protective gloves during check ups, or wash their hands after checking up each and every patient. Likewise, the patients do lack awareness of the virus transmission methods.

“From this point I saw the necessity of joining the project with UNAIDS, which has motivated me to make a positive change,” adds Abdulateef.

Under the title “Knowledge Can Conquer Stigma” Phase I of the project was accomplished, through conducting a Training of Trainers (TOT) that targeted 73 of university professors. Those 73 graduates conducted 18 new training sessions, 10 of them targeted nursing personnel, while the other 8 targeted Med school interns.

A survey was done by UNAIDS at the beginning and the end of the training to test and evaluate the participants’ acquaintance of the virus and dealing with their cases. The results showed that 84% of respondents are now convinced that people living with HIV should not be placed in quarantines compared to 37% at the beginning. There was also a notable increase by 44% among nurses and students who are ok with buying food from a seller living with HIV.

“I was impressed by the project results and participants commitment” Said UNAIDS program coordinator Ahmed Khamis. “Usually healthcare providers in Egypt are not helpful when it comes to dealing with people living with HIV” he adds.

One of the main attributes for such a collaboration, was the initiative coming from Qasr Al-Ainy, “It has facilitated the progress and made the process much easier for us.” He notes, adding that UNAIDS works mainly on shifting the paradigm of medical personnel and the entire community towards people living with HIV, through sharing knowledge and advocacy.

Phase II of the project is expected to expand the duration of training to one year, in addition to enhancing the evaluation and monitoring system for the training. Part of the training will be online and mandatory for all participants. Moreover, the project will tackle the needs of people living with HIV inside the emergency rooms of Qasr Al-Ainy.