Fez - Dr. Imad Hassan Babiker authored a revolutionary book in Sudan. It was first written in Arabic then published in Cairo (late December, 2011). 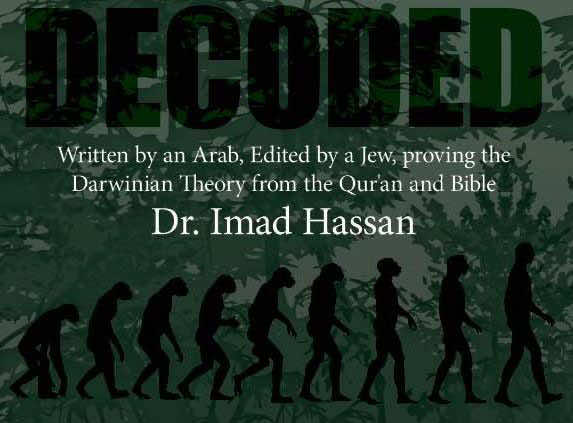 Fez – Dr. Imad Hassan Babiker authored a revolutionary book in Sudan. It was first written in Arabic then published in Cairo (late December, 2011).

This book, which was released early in 2013, in the edition of Dar Al-Watan in Rabat, has raised, since its release various readings and multiple comments in the media as the notoriety of its content formed a controversial issue. “Shajara code Decoded” brings new understandings to holy verses in Quran. This book, according to its author, is a scientific/religious call to Muslim scholars to reflect on Quran again and reinterpret the holy text. The author reveals the secret of the Islamic law of evolution in the ears of cattle, and claims finding the answer for the missing link in the Darwinian Theory: “The Origin of Species.”

‘Shajara Code Decoded’ tackles a very sensitive issue of interest to Muslims’ faith primarily. Muslims and believers in monotheistic religions have always believed that Adam, who is mentioned in the Quran, the Torah and other heavenly books, “but it is a creature created by God directly from the mud,” in the form of a statue and then God blew in this statue of his soul, became male human being. Dr. Imad denies this in his new theory entitled ‘Ears of the Cattle’ (in Arabic: Azan Al Anaam).

The book addresses the amazing facts about the process of evolution in living being since the beginning of creation on earth. The author highlights new ideas on the subject of the creation of Adam, and its evolution over millions of years, before God infuses spirit in him: his ability (God) to turn Man into a sane and a rational person.

According to the author, Man grew a plant from the ground, with the rest of living beings. He lived long stages of his life, walking on four, before Allah the almighty appoint this Man his Khalifa (successor) on earth.

It is now 155 years since the first publication of ‘On the Origin of Species’ on the 24th November, 1859. The book has been the subject of heated debates around the globe. When people talk about ‘Darwinian Theory’ they are likely to refer to the notion of evolution. However, His book discusses multiple integrated theories. The main points Darwin discusses in ‘On the Origin of Species’ are:

1. Evolution: the biological world is constantly evolving from simpler to more complex forms.

2. Common ancestry: All ‘organisms’ in each group share a common origin, and that all ‘groups’ ultimately originate from one common ancestor.

3. Graduation: Evolution is a very slow process that happens over a long period of time and involves too many generations before a new form of species is established.

In ‘Shajara Code Decoded’, the writer concurs with Charles Darwin in his theory of evolution. Darwin analyzed the various mechanisms that govern the evolution of biological life as well as that of Man in particular. By the turn of the twenty-century, Darwin’s work was extremely exploited. The historical rise of communism in the Soviet Union built its atheist dogma on the rejection of all faiths; therefore, a total rejection of Adam’s conception and Eve’s birth from Adam’s rib. On the other side, the three main celestial religions minimized Darwin’s work to the commonly despised idea that we are descendents from monkey ancestors. Darwin did renounce his Christian faith at some point in his life, but he never converted to any other religion. He meditated nature and believed only in its powers. Many of his followers would advocate that Darwin was never an atheist. They usually quote him when he describes himself as follows: “an agnostic would be the more correct description of my state of mind”.

[Say: ‘Travel on earth, and see how he originated the creation. Then Allah will initiate the second creation in the same manner. Certainly, Allah has power over all things] Quran 29:20. Dr. Hassan argues that this very Aya (verse) of Quran describes the state of mind of Darwin. It is true that Darwin converged with apostles and prophets in their quest to know the creator and understand the nature of creation; yet Darwin’s scientific wondering can never be compared to the humble submission of messengers towards Allah (God) when they journeyed in search for the truth. Darwin never finished the journey of investigating nature to know the creator of Nature; Thus; he did “travel on earth”, but did not “see how he (Allah) originated the creation” Quran 29:20.

Dr. Hassan confesses that Darwin was not the pioneer figure in history to ever discuss evolutionism since many other Muslim philosophers and thinkers left ancient scriptures dating back to over a thousand years about their understanding of evolution within an Islamic framework.

Ibn Arabi, who lived about 800 years before Darwin is one of the most respected exegetes of the Quran. His views on the origin of life and man can be summarized in his own words from ‘Uqlatu al Mustawfi’

Ibn Khaldun, nearly a thousand years ago, tackled evolution in his famous ‘Muqqadima’

“This world with all the created things in it has a certain order and solid construction. It shows nexuses between causes and things caused, combinations of some parts of creation with others, and transformations of some existent things into others, in a pattern that is both remarkable and endless. One should then take a look at the world of creation. It started out from the minerals and progressed, in an ingenious, gradual manner, to plants and animals. The last stage of minerals is connected with the first stage of plants, such as herbs and seedless plants. The last stage of plants, such as palms and vines, is connected with the first stage of animals, such as snails and shellfish which have only the power of touch. The word ‘connection’ with regard to these created things means that the last stage of each group is fully prepared to become the first stage of the newest group. The animal world then widens, its species become numerous, and, in a gradual process of creation, it finally leads to man, who is able to think and reflect. The higher stage of man is reached from the world of monkeys, in which both sagacity and perception are found, but which has not reached the stage of actual reflection and thinking. At this point we come to the first stage of man. This is as far as our (physical) observation extends.

Now, in the various worlds we find manifold influences. In the world of sensual perception there are certain influences of the motions of the spheres and the elements. In the world of creation there are certain influences of the motions of growth and perception. All this is evidence of the fact that there is something that exercises an influence and is different from the bodily substances. This is something spiritual. It is connected with the created things, because the various worlds must be connected in their existence. This spiritual thing is the soul, which has perception and causes motion.

Above the soul there must exist something else that gives the soul the power of perception and motion, and that is also connected with it. Its essence should be pure perception and absolute intellection. This is the world of the angels. The soul, consequently, must be prepared to exchange humanity for angelicality, in order actually to become part of the angelic species at certain times in the flash of a moment. This happens after the spiritual essence of the soul has become perfect in actuality, as we shall mention later on”.

The striking conclusion Dr. Hassan reaches is that Darwin himself evolved to become Muslim without knowing about this process (Naturalist- Evolutionist- Muslim). I quote Dr. Hassan from ‘Shajara Code Decoded’: “This is enough to suggest that Darwin, who was not known to discuss theological matters since he renounced Christianity, was a Muslim; just unaware that the word Islam, in its basic meaning, refers to a state of mind, an instinctive humble submission to the supreme creator, not a club that requires membership or permission to join or leave!”

He adds saying, “Since Islam in essence is Christianity without Trinity or divinity of any humans, and most Christians who renounce the classical form of their faith, but not reject the existence of divinity one way or the other, actually step into Islam, even if they don’t recognize that. Darwin has fulfilled several major criteria that make his humble submission before the power of nature is a step into the Islamic arena. This is what made his faith at his deathbed a mystery to so many. He was definitely neither Christian nor atheist. Yet, he was humbly submitted to the powerful findings of his life experience!”

As I see it, Darwin may have submitted to nature but did not humbly submit to the divine power governing this nature (Allah/God). After all, Islam means “the humble submission to the divine power with the purpose of living harmoniously with the natural world God created”. No matter what theories Darwin believed in when he was dying, he cannot have died Muslim.