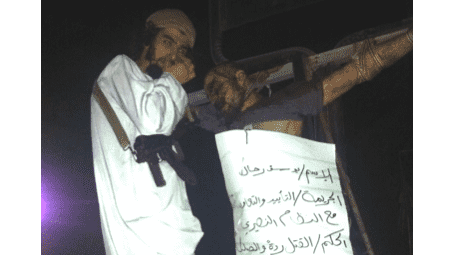 By
youssef sourgo
-
Youssef Sourgo is currently a Master’s student in Linguistic and Literary studies at Ain Chok Faculty of Letters and Humanities.
Aug 21, 2014
Spread the love

In one of the pictures he shared, Hamdouch appears pinching his nose next to a crucified body. According to a placard hanging on his body, the crucified man is Youssef Rahal.

According to LE360, Hamdouch threatened the Moroccan King, as well as political institutions and representatives of Morocco abroad for their “support of Saudi Arabia and Libya.”

In addition, Hamdouch said that many areas in Morocco will soon host training camps for ISIS combatants, according to the same source.

In the same context, Ahmed Chaara, another Moroccan ISIS fighter, was arrested in Turkey thanks to the joined efforts of French and Turkish security services.

Amidst the terror that ISIS terrorist threats against Morocco have spread in the kingdom, the Royal Armed Forces have been mobilized in all corners of the country to deter terrorist from attacking its strategic sites.