Marrakech - It has been six years since I last visited Fez, but during that visit I felt that I truly got to know the city, with the help of my friend Mark Willenbrock and an excellent guide, Farida. The route through the Bab Bou Jeloud, with its lines of jewelry stores, leather shops, scarves, and ceramics, is a well-known tourist attraction. Turning back to Bab Bou Jeloud, I cross over to another street, and find a superb bookshop with a wealth of English language titles many on Morocco. The Libraire Kounouz Al Maarifa is like manna from heaven for a Marrakech resident, starved of good books in English. I chose Journey into Barbary by Wyndham Lewis. 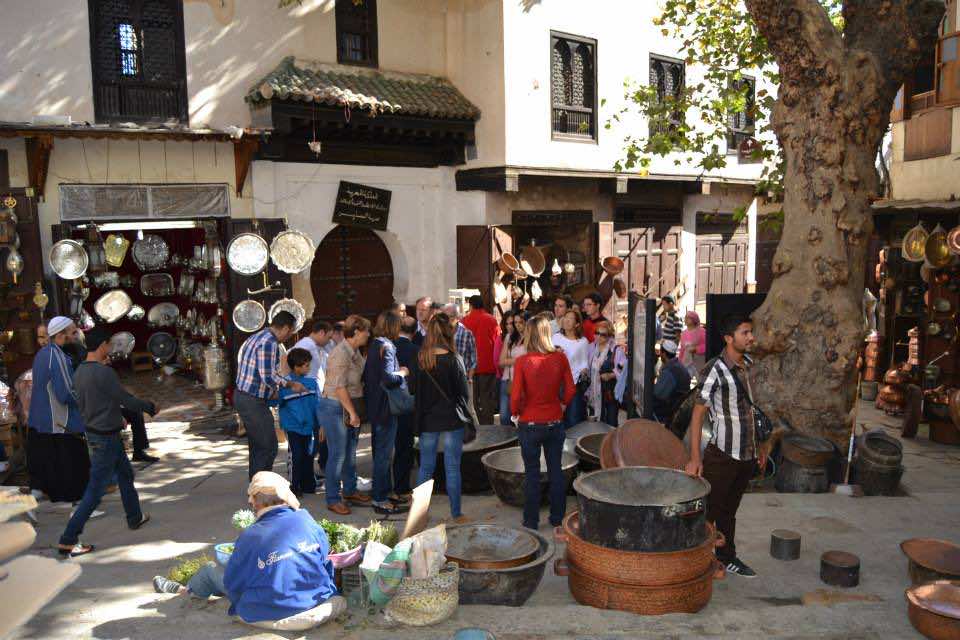 Marrakech – It has been six years since I last visited Fez, but during that visit I felt that I truly got to know the city, with the help of my friend Mark Willenbrock and an excellent guide, Farida. The route through the Bab Bou Jeloud, with its lines of jewelry stores, leather shops, scarves, and ceramics, is a well-known tourist attraction. Turning back to Bab Bou Jeloud, I cross over to another street, and find a superb bookshop with a wealth of English language titles many on Morocco. The Libraire Kounouz Al Maarifa is like manna from heaven for a Marrakech resident, starved of good books in English. I chose Journey into Barbary by Wyndham Lewis.

The Medersa Bou Innania is stunning, with its carved stucco, lined with prayers and sayings of the prophet and its great dark wooden awning. The perfect proportions and the beautiful Minaret make one feel as if they have arrived in architectural heaven. In Fez there is a wealth of Islamic architecture for the tourist to see, such as the Medersa Cherratine,the El Attarine Medersa, and the Sahrij  Medersa. Fez is rich in Islamic architecture, narrow passageways (some of them underground), high walls, and buildings interspersed with shops and riads. They create an intimate world where you walk back in time into the Middle Ages. 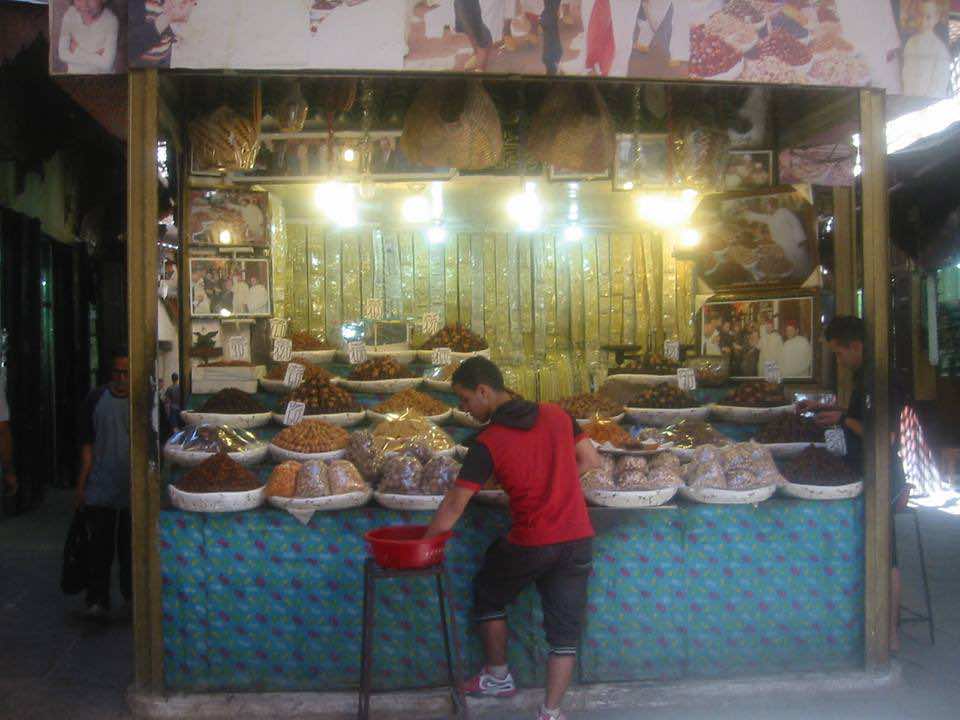 I have rarely used a guide before, but Farida took me from the Batha Museum through Sidi Moussa down a winding, narrow street where families came and went and contractors performed the hazardous business of shoring up buildings with wooden stilts and supports.Farida showed me her former home and school and the local bakery. So much has changed, she said. But much remains the same, as we pass through a tunnel where a figure sits almost in the dark. These streets are where people live as they have always lived in the sacred city. Farida points out where babs (or gates) used to be, as Fez was very much a city divided by gates, as Paul Bowles records in an article on Fez he wrote in 1950. Nowadays, the streets are freer and the gates are gone.

We walked down the road past the Dar Bathia Institut Francais and entered the Rue Zrbtana Ain Azlitana, a quiet winding street with high white walls. Men passed us in djellabahs and women in traditional colorful dress. Children run by laughing. Some riads and restaurants can be seen as you pass by their open doors. The doors are usually brown, with bolts arranged across them in exactly the same way. Some have traditional  door-knockers. The Riad el Fez has a long and inviting entrance and a fine garden arranged across it. Small digging trucks go back and forth to a construction site. Mercifully, there are no motorbikes: an additional boon for anyone who knows the Marrakech medina. Fez is built on hills, so streets go up and down quite steeply. There are steps that make riding a motorbike impossible. 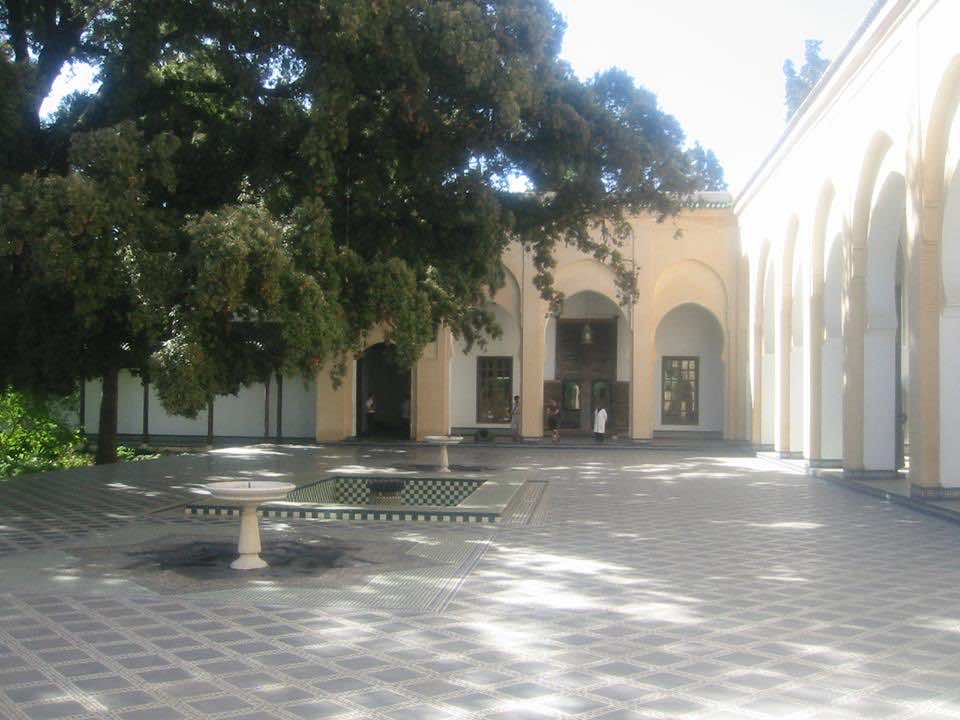 Donkeys and mules laden with goods (I saw one carrying a washing machine) pass by to cries of “balak”. Some of the houses are supported by narrow wooden beams, which testify to the difficulty of doing restoration work in such narrow streets.  The Ruined Garden is a good place to eat on a hot day, as its leafy garden provides a shady retreat for those who have been pounding the streets. Crossing the Talat Seghira, we go down into the souk, which leads to a blur of stalls selling leather goods, carpets, scarves, perfume, brassware, and ceramics intermixed with electronics,mobile phones, everyday items, spices, and trailers full of halwa pink, green, and white. The Cherratine Medrasa, the Sidi Ahmed Tijani Zaouia, and the tomb of King Idriss are fabulouslydecorated with zellij tiles, ornate stucco, and beautiful colors. The profusion of different things makes your mind spin, with no hassle or aggressive salesmanship. 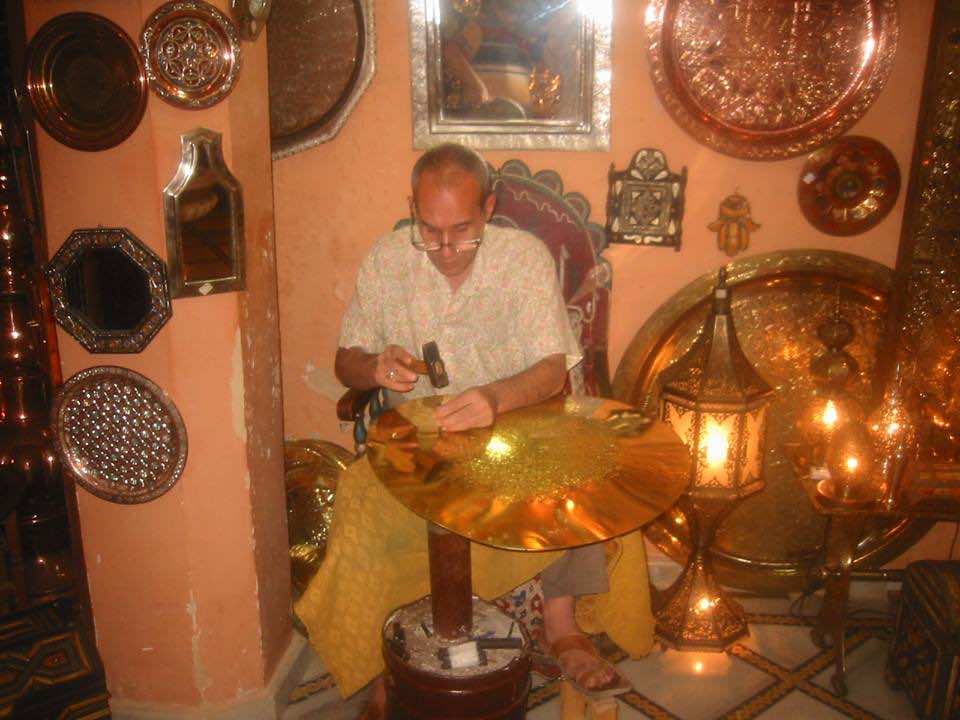 We escape into a jewelry, an Aladdin’s cave on two floors at L’Art des Fibule in Sidi Mousa 43.I watch a craftsman tap a design onto a brass plate and looked through cases of jewels, silverware, necklaces, earrings, and countless curved daggers. My impression is that the quality of the items lit so brightly with ornate lanterns is far better than anything I have seen in Marrakech. We also view a small weaving factory for scarves, complete with a weaving machine. There is a street lined only with stone wheels for sharpening knives, and all the craftsmen send their cutting implements to be sharpened. Fez retains its local character. There are preschool Koranic schools for small children in and amongst the souk stalls. Later, on my own, I ended up delighted and exhausted at Mark’s riad,Dar Rabab. It is easy to get lost in the Fez souks because they are so large, but it is worth it. 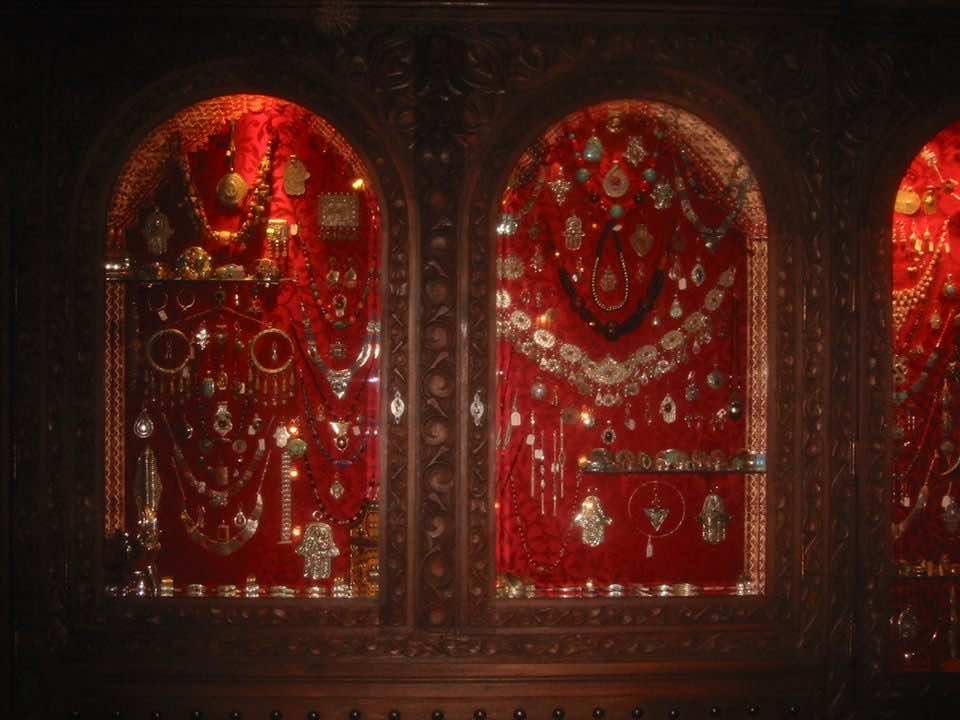 An evening drink at the delightful Palais Jamai hotel bar left me reflecting that there is great virtue in leaving something that works well alone. The British in particular prefer an older environment that preserves its style, rather than ripping down buildings and replacing them with something that is modern and has no style at all.

I also took time to see the Glaoui Palace and the El Mokri Palace (the new one) These places are an integral part of  Morocco’s architectural history. Even if the Glaoui Palace is dilapidated, the El Mokri palace in its stately light blue decoration has been well preserved by the El Mokri family. Hopefully it will find an investor for a better future for exhibitions and events. Restoration and preservation is critical for Morocco’s architectural heritage, as well as the building of new hotels and resorts. Somehow in Fez, the spiritual and cultural home of Morocco’s Arabic heritage, one is made more aware of this, as the ancient is preserved with reverence and love. Fez has benefitted from the golden heritage of Al Andalus and Kairouine, and has far more to offer in terms of cultural and architectural heritage than anywhere else in Morocco.  My three-day trip was well-spent and I look forward to returning soon. 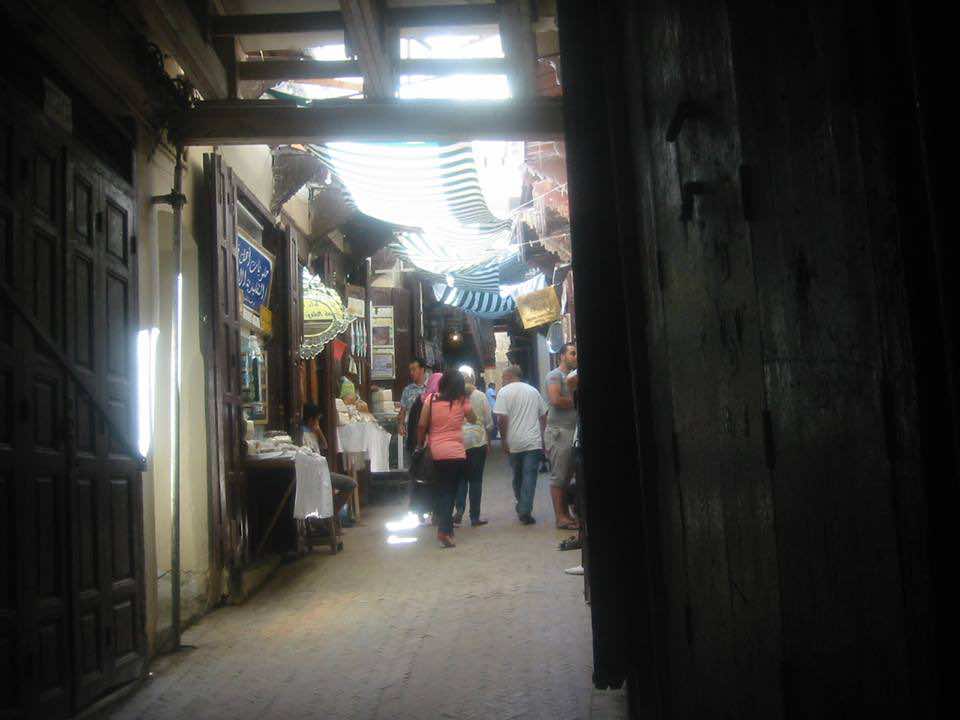 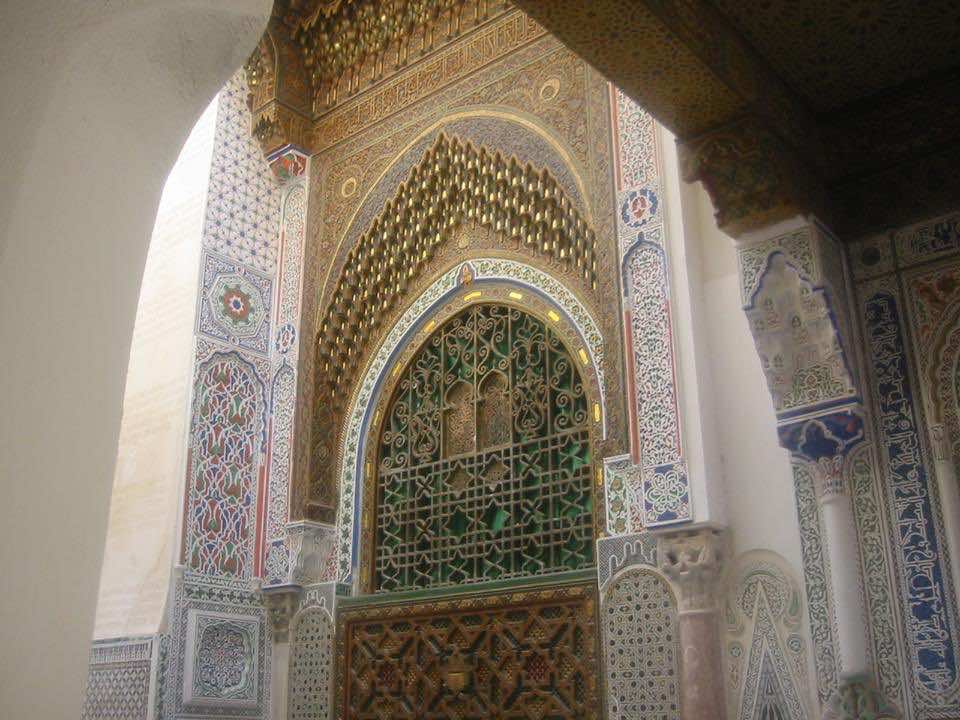