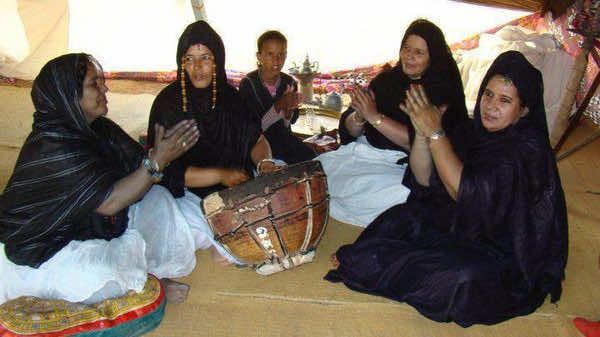 Guelmime – In the south of Morocco, some Sahrawi tribes celebrate the divorced woman after the end of her marriage, acknowledging her honor and prestige.

The tradition aims at preserving the woman’s dignity and reviving her chances to get married again, since in the Hassani community there is no difference between the deflowered and the virgin in terms of her dowry.

Contrary to the stereotypical images of women in Arab-Islamic societies, in some Sahrawi regions in the south of Morocco women are given a high degree of appreciation, respect, and favoritism.

Sahrawi women occupy a special position in the community and are regarded as the backbone that contributes greatly to the development of the society. Being married or not has nothing to do with the privileged status associated with women in some Sahrawi regions.

Divorce is considered a major setback for women in many Arab and Islamic societies, but the Sahrawi community takes the occasion to renew its confidence in the woman to the extent of celebrating her unhappy divorce.

In this context, researcher in Sociology and Hassani Culture Mohamed Dahman at Ibn Tofail University in Kenitra, “sees that despite the decline in the rate of celebrating the divorced woman in some Sahrawi regions. This culture of celebration must be taught and generalized, taking into consideration its value in the development of the society”

The researcher explains that when a woman gets divorced, she returns to her family‘s house waiting for another man to marry. In the Sahrawi dialect, “Harsh laha”, is the declaration of a man to marry a woman, and following the tradition, the candidate for husband slaughters a camel in front of her family’s house, a tradition called “ i3ar9b 3liha.” Then the family starts banging drums and expressing gratitude to God, and as an aspect of their happiness they say, “the woman came back and the man did not die.”

The researcher adds “the woman’s status rises when she marries twice or three times, as a result she gets an access to attend the public meetings and being consulted within the family, so the increase in woman’s value answers the questions how many times she get married.”

In Sahrawi society, a divorced woman is not regarded as the subject of insult. It is not an occasion for the family to pressure on woman to get remarried. Instead, it is taken as a normal experience in one’s life that has nothing to do with self-esteem or privilege.

Hassani society holds a rich cultural heritage of values in regards relationships with women, and the celebration of divorce is a demonstrative aspect of the privileged status that women occupy in the Sahrawi community.