Rabat - Moroccan minister of the Interior and his Spanish counterpart held on Wednesday in Tetouan a working meeting dedicated to fight against terrorism, the 2014 transit operation, illegal immigration, fight against drug trafficking and regional security and stability. 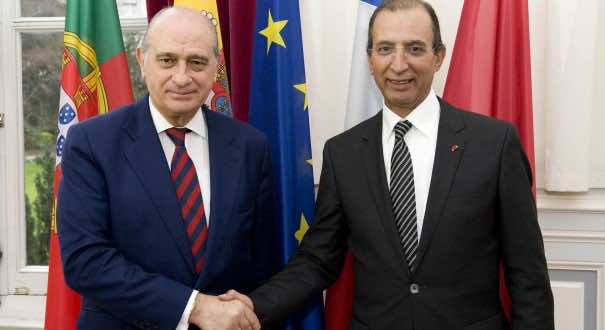 Rabat – Moroccan minister of the Interior and his Spanish counterpart held on Wednesday in Tetouan a working meeting dedicated to fight against terrorism, the 2014 transit operation, illegal immigration, fight against drug trafficking and regional security and stability.

This meeting was an opportunity for both officials to recall strong brotherly relations uniting King Mohammed VI and King Felipe VI, the quality of relations of cooperation between the governments of the two countries and the attachment of the two peoples to democracy, freedom, tolerance and good neighbourliness values, said the two parties in a joint release.

Concerning fight against terrorism, Moroccan and Spanish interior ministers reiterated commitment to continually improve mechanisms of exchange of information between intelligence services, particularly in fighting jihadists recruiting networks for terrorist groups, welcoming positive results achieved through this ongoing cooperation, as evidenced by the breaking up of networks operating in the two countries in March, June and August 2014, the joint release added.

With respect to the 2014 transit operation, the ministers highlighted the success of this operation thanks to Spanish and Moroccan authorities’ combined efforts aimed at ensuring safety and comfort for passengers.

As for illegal immigration, Spanish interior minister thanked his Moroccan counterpart for the efforts made Moroccan authorities to fight against this phenomenon, underlining quick reaction of Moroccan competent services to face exceptional attempts of illegal immigration on August 11-12, 2014 and the efficiency of coordination and communication mechanisms between Moroccan and Spanish ministers.

The two ministers reiterated their commitment to make sure the fight against illegal immigration is done with full respect for human rights and dignity, recalling in this context the importance of King Mohammed VI’s initiative to establish a new human rights-based Moroccan migration policy.

Conscious of the role of Morocco and Spain in preserving security and stability in the region, the two parties agreed to strengthen their direct and permanent links in favour of an effective coordination between their services.

The two ministers also agreed to meet at least once every six months in order to coordinate the implementation of the agreed cooperative measures, assess achievements and adopt future cooperation measures, the joint statement concluded.