Rabat - Amid continuing massacres, a new horrific video shows the Islamic State in Iraq and Levant (ISIS) apparently executing over 250 Syrian army soldiers after stripping them on Thursday, at an air base in the northeast city of Raqqa. 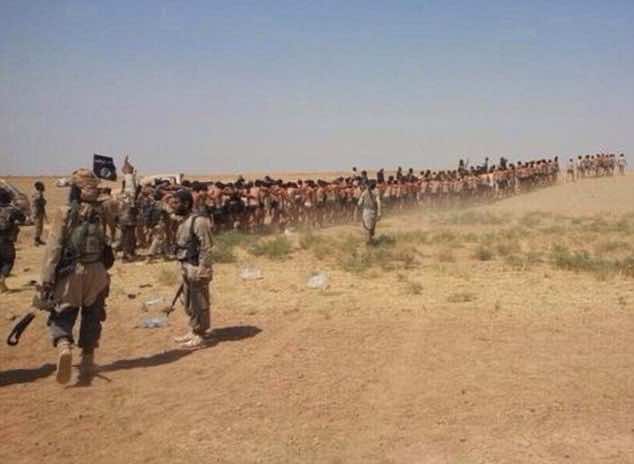 By
Aziz Allilou
-
Aziz Allilou is a student at the Higher Institute of Media and Communications (ISIC) and Morocco World News correspondent in Rabat.
Aug 28, 2014
Spread the love

Rabat – Amid continuing massacres, a new horrific video shows the Islamic State in Iraq and Levant (ISIS) apparently executing over 250 Syrian army soldiers after stripping them on Thursday, at an air base in the northeast city of Raqqa.

ISIS reportedly captured the Syrian soldiers after its Jihadists stormed the air base in the province of Raqqa, last Sunday.

According to the Daily Mail, the ISIS-Jihadists forced the Syrian militants to strip down to their underwear and marched them through the desert before executing them.

In the horrific video, dozens of Syrian militants apparently seen lying face down on the sand wearing nothing but their underwear, their bodies lined up next to each other on the bare earth.

The video was posted on one of the IS’ YouTube channels, and the massacre has been confirmed by an ISIS-Jihadist.

Reuters quoted an ISIS-Jihadist as saying that 250 men were executed after the march. The Syrian Observatory for Human Rights, meanwhile, reported that 200 Syrian soldiers and 346 ISIS jihadists died during the battle over the air base.

Deputy Director of Human Rights Watch for the Middle East, Nadim Houry has labeled the video as ‘another ISIS war crime.’

Following the the posting of the video, the UN Commission accused the extremist group of committing crimes against humanity in Syria, similar to those it has already committed in Iraq, reported the Daily Mail.

On Sunday, the Islamic State fighters stormed the airport base in the province of Raqqa, after weeks of bitter fighting with the Syrian amy soldiers.

AFP quoted the head of the Syrian Observatory for Human Rights monitoring group, Rami Abdel Rahman as saying that “Dozens of Syrian soldiers captured while fleeing… after IS overran the Tabqa airbase were executed by the jihadists during the night.”